EXCERPT: Trouble In My Way 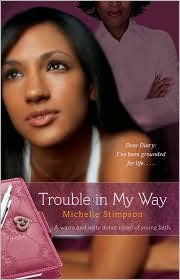 Trouble In My Way
by Michelle Stimpson

Derrick is cute -- NOT! I can't believe I risked my life by having Tamisha take me over to his house instead of the football game. Seriously, if my mom found out, I would be writing my eulogy instead of writing this journal entry. And for what? Some boy who does not have one single real DVD in his famed DVD collection! I swear, every single movie he had was bootleg. I think his whole room was bootleg. His whole game is bootleg, when I think about it! He acts like one thing in the beginning, but when you look closely, you realize it's not exactly as good as the real thing. Okay, here's what happened: Tamisha took me over to his house -- we synchronized our watches -- she was to pick me up in EXACTLY forty-five minutes. There was no one except Derrick at his house, so I knew I didn't want to be over there too long. Anyway, we started watching a movie on the floor in his bedroom. Everything was fine at first. I mean, so long as I didn't stare at him right in the face, it was okay. I just kept trying to think about all the wonderful things we'd talked about on the phone because he was NOT as cute as I remember him. So, there we were watching the movie to the best of my ability since it was a little blurry. I was just getting beyond the fact that I had to ignore the line running through the middle of the screen, and the next thing I know, Derrick is trying to kiss and hug and all that. I was like, "Hold up! Wait a minute!" and he was like, "What's wrong, baby?" like this is some kind of bad music video. I could not believe how he was trying to turn our movie-watching into some kinda romantic rondayvu (spelling??). When we're on the phone, he's an innocent little boy, but when we were together, he was a grown octopus! I'm not saying I wasn't feeling his kisses -- I'm just saying, I wasn't trying to do all that. See, I know how and when to draw the line. I know when enough is enough. Thank God, Tamisha came right on time! I was outta there so quick! I know Derrick is nice and all, but he is not the one for me. Maybe we should just be friends because #1, he is not that cute, and #2 he is having some issues right now that I cannot help him out with. I think I'll leave him alone until his hormones settle down.
-- Karis Laying-Low Reed

Dear Me,
Mom just read my journal. Here is what I'm thinking:
#1 -- Nothing happened at Derrick's house, so I don't know what the big deal is.
#2 -- I can take care of myself, which was actually proven in the journal!
#3 -- What gives my mother the right to just go in my room and pick up my journal and read it?
#4 -- If my mom keeps me from getting the car that my daddy promised me, I will leave this house!
#5 -- Derrick does not look like Bow Wow. Do not ever fall for a guy that you have only seen from the 9th row up in the stands at a basketball game.
Maybe I should stop writing all of my personal stuff down. But if I do that, who will I tell all my problems? I mean, I have my friends, but they don't understand me like this journal does. No, I can't give up the journal. I will just have to find a good hiding place for it.
-- Karis I've-Been-Wronged Reed

Now I'm searching all over my room for a journal hideout spot. I've got to hide it in a place where it's so out of place no one would ever look there. There again, I have a problem. My mother might have the voice to be a minister, but she's got a nose that could outsniff a hound dog. She can smell trouble all over me. When I was little and I got a bad note from school, I could barely get off the bus before she'd say, "Something's wrong with you. What happened at school today?" And since I've never been a good liar (at least not to my mother, anyway), I'd have to break down and tell her the truth, the whole truth, and nothing but the truth.
I'm searching through the closet now for a place big enough to hold a journal but small enough to be inconspicuous, and that's when I decide to forget it. Deep down inside, the truth is: I don't want to hide things from my mother. Once again, the tears start to sting my eyes. It bothers me that she read my journal. My mother and I have been living in this house alone for the last five years. When she and my father divorced, she got the house and me. She's always talking about how we only have each other and God. Always talking about how levelheaded I am, what a blessing it is to have a daughter who is so self-reliant. So what made her think that she had to read my journal? What happened to the trust? In a way, I feel like she deserves whatever she got for reading it.
I figure the best thing I can do is stop writing in the journal until I'm eighteen, at which point I can do and write whatever because I will be grown. You hear me -- grown! I cannot wait for that day! Go where I want to go, do what I want to do, answer to nobody but myself. And God, I suppose, but that shouldn't be too hard, since He already knows everything.
I close my journal and put it where I have always put it -- in my top drawer. If I can't have my privacy and if my mother can't trust me, then...whatever. That's on her, except right now it's on me because I'm the one who's grounded. There's something seriously wrong with this picture.

Copyright © 2008 by Michelle Stimpson
Posted by LaShaunda at Wednesday, November 26, 2008