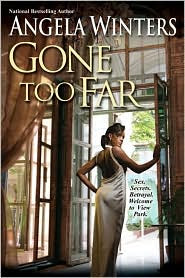 Angela Winters is the national bestselling author of several novels and novellas. Her first novel, ONLY YOU, was published in 1997, followed by her first novella, MAMA DEAR: NEVER SAY NEVER and her first romantic suspense, SWEET SURRENDER. Some of Angela's other romantic suspense titles include ALWAYS A CHANCE, A CAPITOL AFFAIR, A CLASS APART, HIGH STAKES, SAVING GRACE, DANGEROUS MEMORIES, SEASON OF LOVE: COMING HOME, LOVE ON THE RUN, KNOW BY HEART, SUDDEN LOVE, A FOREVER PASSION and ISLAND PROMISE. VIEW PARK is Angela's first mainstream fiction novel and is the first in a family saga featuring the enigmatic Chase family. VIEW PARK is followed by NEVER ENOUGH, NO MORE GOOD, A PRICE TO PAY, and GONE TOO FAR. Her next book series, focused on a group of twenty-something women in the D.C. area managing their husbands, boyfriends, lovers and careers will be published in summer 2011. A native of Chicago, Angela received her Bachelor’s in Communications from the University of Illinois at Urbana-Champaign and her law degree at American University's Washington College of Law. She currently lives in Washington, D.C.

I had been writing my entire life but was too afraid to share it with anyone until I heard that publishing companies were looking for romance books featuring minority characters when I was reading Writer's Digest magazine. I sent the first three chapters of one of my books to a publisher in 1995 and heard back from her three months later. My first novel, ONLY YOU was published later in 1996.

Writing GONE TOO FAR was an emotional experience for me because it signifies the end of the Chase family arc and I have become so incredibly attached to these characters. I learned that it is possible to say goodbye to characters and still believe they can live on because they still do in my mind.

I wanted to bring some closure to the most popular characters of the series. I hope GONE TOO FAR has done that. Nothing is ever completely over but I was hoping that everyone can understand where all the characters are heading, mostly in a positive way, and understand why they made those choices.

Writing VIEW PARK was the hardest test because I was leaving a very comfortable genre of romantic suspense. I had written a lot of novels that were doing well and could have gone on doing that for a long time, but I wanted to do something new and different and was told by some in the business that genre jumping doesn't usually go well, so it was hard for me to stay focused and do this. Ultimately it worked out.

If you had the opportunity to talk with three writers, who would you choose and why?
Toni Morrison would be #1 because BELOVED is my favorite book and I wanted to know what she was feeling when she wrote the inner workings of the main character's head. Stephen Carter because I like how his books present a different image of black characters and how he writes really intricate storylines. Also, Nora Roberts just because she cranks out an endless amount of books and each of them still seem fresh and new. I just don't know how she does it.

I wish I had known better marketing tools, how to appreciate how blessed I was in being published in the first place and to stop planning so much and just do it.

Don't let your fear of being rejected consume you. For a lot of writers they can't stand being judged and someone saying their work isn't good so they procrastinate in sending their work out. John Grisham was turned down more than 35 times before his first book sold. Rejection is okay. Do associate with other writers as much as you can. This is not just good for professional contacts, but the advice that they can give about character building, writer's block, and promoting their books is invaluable.

My author fantasy is to have someone call my agent and say they want to make my VIEW PARK series into a television series or miniseries. I dream about seeing these characters on screen.

That you can't just explain where you get your ideas from because sometimes you can’t really tell yourself. Sometimes in dreams and sometimes out of the thin air. They want to know a formula, but there is no one formula.

The worst? The best was to make sure what you send in is of the highest quality possible. They always get proposals and books with horrible misspelling and grammar errors or on weird colored paper. They always toss that stuff. The worst was one or two people in the industry told me to stick with my original genre, play it safe. I'm glad I didn't listen to them.

I've traveled to a lot of my dream places, but one place I haven't been is Rome. I would love to visit Rome and see the sights; especially the Sistine Chapel, the Coliseum, and the Vatican.

I don't do anything odd enough to qualify for that. I do paint and when I tell people that they seem a little surprised, but that's about it.

Our theme for this month is Reaching Your Goals?

How did it feel to reach your publishing goal? I was so young when I was first published and it came at such a perfect time, I couldn't really appreciate it at the time. However, as I got older I realized how many people had not been able to realize their dreams of being published and it made me realize how lucky I was. When you see your books in some random book store in a different state or country, it really hits you and you have to smile.

That I've been blessed. While my life hasn't been perfect, it has been really, really good.

The next book will be a sort of Housewives of DC themed book about three women who live in the D.C. area and are trying to get ahead in life. They all come from the same background, the hard streets of Southeast and have made their way up in the world, but continue to struggle due to drama with their husbands, ex-husbands and lovers. They are struggling with their careers and all hold secrets from that past life that seem to keep coming back to bite them. They fight and argue a lot, but all of them really rely on their friendship to get them through everything. It will be the first in a new series.

Readers can go to www.viewparkonline.com to find out about my VIEW PARK series. They can also email me at viewparkseries@yahoo.com.

GONE TO FAR is the final installment of the VIEW PARK series, the story of America’s Black Royal Family, the scandalous, ultra-rich, and powerful Chase clan. Carter Chase is engaged to the beautiful Julia Hall, but he's still not over his ex-fiancée, Avery. And while Avery can't seem to resist Carter's charm in the bedroom, she's terrified by his threats to take their daughter away from her. After all, Avery knows she can't win a fight against the influential Chase family. In the meantime, Carter's brother, Michael, is embroiled in his own drama, consumed with guilt over the pain he caused his now ex-wife Kimberly. Six months after granting her a divorce, Michael wants her back. A tragedy may reunite them until he finds out what she’s been planning with his uncle. While youngest daughter Haley and her new husband, Peter, cause the family concern, oldest daughter Leigh thinks she's done with dating-until she meets black Republican senator Max Cody. The last thing Leigh wants is another high-profile affair, but she finds herself falling for Max anyway. Leigh vowed to avoid another scandal for her family-but when you're a Chase, that kind of promise is impossible to keep.

Ask a question for a chance to win a copy of Gone To Far.

If you enjoyed this post, please consider becoming a member of SORMAG's community - Join Today
Posted by LaShaunda at Friday, June 25, 2010

Thank you for being our featured author today. Many blessings to you.

LaShaunda,
As usual another great interview. I loved Angela's answers and advice to aspring writers. I really love the ViewPark series. I still have a couple of books yet to read. I thought ViewPark was excellent.

Continued success to both of you.

Will the women in your upcoming series have a past free of drugs and drug dealers? I ask because the charactersfrom South East so often have these stigmas attached to them. I for one would like to see a heroine who escapes the jungle of South East without supporting herself through a life of crime or by relying on a drug dealer for support.

I can't give away any details of the secrets of the women's pasts, but none of them got out of Southeast due to drugs or drug dealing.