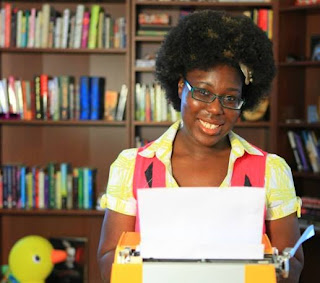 Ernessa T. Carter has worked as an ESL teacher in Japan, a music journalist in Pittsburgh, a payroll administrator in Burbank, and a radio writer for American Top 40 with Ryan Seacrest in Hollywood. She’s also a retired L.A. Derby Doll. A graduate of Smith College and Carnegie Mellon University’s MFA program, 32 CANDLES is her first novel.

Well, I've wanted to be a writer as long as I can remember. I wrote a couple of unpublishable novels in high school. But then I abandoned that kind of writing and worked as a journalist for a while before receiving my MFA in Dramatic Writing from Carnegie Mellon University. I moved out to Los Angeles, and toiled away as a screenwriter and a playwright, before landing a job as a radio writer for American Top 40 w/ Ryan Seacrest. I wrote 32 CANDLES on the side, and eventually became a write-at-home mom. I originally wanted to be a novelist, so I think it's very funny that I tried on so many writing hats, when the first one I tried on was the one that fit the best.

The main character taught me so much, how to be spunky, how not to give up, how to forgive, how to achieve your own kind of happiness.

Well, I was frustrated with many of the main characters I saw in romantic novels. They were either super-glamorous or complete sad sacks. My favorite book of all time is THE COLOR PURPLE. My second favorite book is ANNE OF GREEN GABLES. I really wanted to write a character who was both funny and painfully awkward.

Navigating self-doubt is a bear. The voices in my head telling me that I can't do it remain my toughest enemy. But I can't hate on them. They keep me honest and hungry and let me know that I must really love writing, because I certainly wouldn't put up with them if I didn't.

I met a very famous author in college and found her patronizing, removed, and rather ridiculous, so now I try not to meet my heroes if I can. So here's who I'm actively avoiding: Alice Walker, Junot Diaz, and Marian Keyes

I actually think it's for the best that I didn't know that 1) The more success you have, the more anxiety you have, 2) Writing isn't a romantic job. It's a job-job and really hard work. 3) No matter how much you write, your grammar and spelling is just going to get worse as the years go by.

DO write everyday, even if it's only for twenty minutes. DON'T start looking for an agent after you finish your first draft. If you've only written one draft of your book, it's not ready to go out.

My author fantasy is actually quite dull: to sell enough books to keep me in writing contracts until I die. I want to die writing like Ida B. Wells, just keel over on top of my keyboard when I'm in my hundreds. The rest is just gravy and nothing I actively fantasize about.

I've had a few people tell me that I'm lucky to have such an easy job. I think they say this because I love my job. But seriously Confucius lied to all of us. No matter how much you love this job, it will still seem like hard work, mainly because it is really hard work.

Start a blog before you send out your novel. The worst? You have to know someone or be a celebrity to get a deal these days. That's so untrue. Work your craft and the deal will come.

It changes every year, because I try to go to all the places I really want to go, no matter how tight my budget is. When I was growing up in St. Louis, we went to Mississippi every other summer and Chicago once. I used to look at the globe and dream of going to every country I saw. So now I'm a bit of a world traveler. I worked in Japan for a year and traveled all around the Eastern Hemisphere. I recently fulfilled a lifelong dream to visit Scotland and I'm currently plotting a 2011 family trip to take gelato classes in Italy. In a couple of years, I'm going to have to go to Cameroon to research my third novel, but I won't worry about that trip until I'm done with the rough draft.

Our theme for this month is Reaching Your Goals?

How did it feel to reach your publishing goal? It's funny, because it's a bit like the notion of happily ever after. You're happy to have finally met your prince, but now the hard work of raising a family and maintaining a marriage begins. Getting published is just like that. You kiss your publisher, the music swells, and now you have to raise your career. It's still happily ever after, but it's not all birds landing on your finger and singing along with you.

It's called THE AWESOME GIRLS GUIDE TO DATING EXTRAORDINARY MEN; it has three main characters: a comedian, a musician, and an accountant; it takes place over two years; it's about friendship, career, family, and (most of all) love.

Feel free to send me an email at etc@32candles.com or visit my website at www.32candles.com 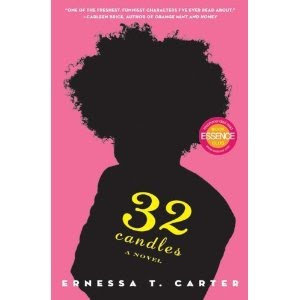 Davie—an ugly duckling growing up in small-town Mississippi—is positive her life couldn’t be any worse. She has the meanest mother in the South, possibly the world, and on top of that, she’s pretty sure she’s ugly. Just when she’s resigned herself to her fate, she sees a movie that will change her life—Sixteen Candles. But in her case, life doesn’t imitate art. Tormented endlessly in school with the nickname “Monkey Night,” and hopelessly in unrequited love with a handsome football player, James Farrell, Davie finds that it is bittersweet to dream of Molly Ringwald endings. When a cruel school prank goes too far, Davie leaves the life she knows and reinvents herself in the glittery world of Hollywood—as a beautiful and successful lounge singer in a swanky nightclub. Davie is finally a million miles from where she started—until she bumps into her former obsession, James Farrell. To Davie’s astonishment, James doesn’t recognize her, and she can’t bring herself to end the fantasy. She lets him fall as deeply in love with her as she once was with him. But is life ever that simple? Just as they’re about to ride off into the sunset, the past comes back with a vengeance, threatening to crush Davie’s dreams.

If you enjoyed this post, please consider becoming a member of SORMAG's community - Join Today
Posted by LaShaunda at Monday, June 21, 2010

I had to stop by to comment. Love the hair!

I will be looking forward to reading Ernessa whenever I get some downtime to read for pleasure.