BOOK OF THE DAY: Knife In The Back II by Stacey Covington-Lee 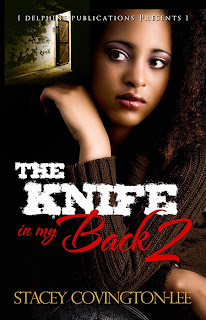 After seven long years in state prison, Tameka Williams is being set free. Unfortunately, all of the anger and resentment that she's lived with during her incarceration are being freed as well.

While Brook Mansfield-Banks was not pleased with the idea of her mortal enemy being released, she was ready to defend her family and show Tameka that she was no longer the naïve pushover that she once was. But, Brook has forgotten just how deep Tameka's wickedness runs. Now the fate of her child will once again be determined by Tameka Williams.

Mia Purcell has always been the loving and supportive friend. She was there for Brook through all of her trials and tribulations. Now with her marriage falling apart, she's the one that will need the strength of a true friend. There's only one problem, her marital issues have a strange connection with Tameka. Mia and Tameka find themselves working together in order to uncover the truth about the men in their lives. But is this unlikely duo more than Brook can stand? She will have to dig deep and put her hatred for Tameka aside if she wants to be the friend that Mia desperately needs.

Stacey Covington-Lee is a native of Atlanta, Georgia. She has written multiple manuals and training guides for various companies and local government. However, it was her love for literature that led her to pin her first novel in 2009. Since that time, Stacey has written several short stories and two additional novels. Her first published novel, The Knife in My Back, was released by Delphine Publications November 2012. Her sophomore novel, The Knife In My Back II, was released July 2013. Stacey continues to live in an Atlanta suburb with her family and is currently working on her next novel. Visit her at www.staceycovingtonlee.com for excerpts of The Knife In My Back and The Knife In My Back II.