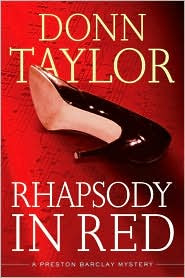 Rhapsody in Red
by Donn Taylor


"That Wednesday, two weeks before Thanksgiving, was a bad day to find a corpse on campus." Preston Barclay is a self-made recluse (and he likes it that way). Teaching college history allows him time to grieve the loss of his pianist wife and find relief from the musical hallucinations that have been playing in his head since her death. But when he and a headstrong colleague, Mara Thorn, discover the body of another instructor on campus, Press's monotonous solitude is destroyed.

When the preliminary evidence singles out Press and Mara, they must take some chances (including trusting each other) to build their own defense--by bending the rules just a bit.

They form an unlikely alliance to stay ahead of the police, the college's wary and incompetent administration, and whoever is trying to get away with murder. Otherwise, they both might end up unemployed, behind bars, or worse....

I lost 13 lbs in only two weeks by obeying this one easy rule http://www.officialacaidiet.com/index.php?id=One+Simple+Dieting+Rule