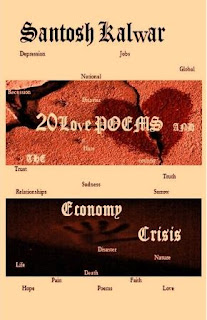 20 Love Poems and The Economy Crisis

The book contains Twenty Love poems and the poem for the global economy Crisis. The book consists of 20 great romantic poems, inspirational poems and love poems for those who are in love or for those whose heart is broken in love. In addition, there is one great poem for ongoing economy crisis in the world. Book has life of its own, it speaks to the reader and shouts, "5th book releases with title, 20 love poems and the economy crisis, international bestseller in book's heart but hardly people read poetry these days, my lord." Book has been really appreciated and praised strongly by Paulo Coelho's readers in his official blog. You can read few praises on the back cover of the book but you need to open the book to read them all. The book is Fifth self published work, after "Nature God (2008)" and "Human Behavior on the Internet: Master's thesis (2009), A Very First book of Poems: Heartbreak (2009) and ...109 Quotes, 07 Poems and a song of despair (2009)". 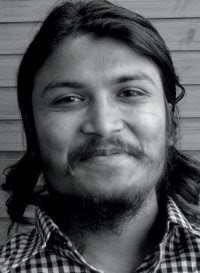 There are six books which I have written and each book is different from one another. As the title of the book will say, the first book which I wrote was about the collection of articles and columns which were published in the National newspaper of Nepal, The Kathmandu Post and The Himalayan Times. In addition, there were many opinions which were written for the book in “Nature God” (2008), My Second book entitle, and “Human behavior on the Internet” (2009) is a book crafted from the Master’s thesis work carried out at Lappeenranta University of Technology, Finland, where I am currently doing research on anxiety, social engineering and internet technology. The third book entitle “A Very First book of Poems: Heartbreak” (2009) was written when I was personally going through the same in my own life. How does feels when your heart is completely broken? What happens in your heart and mind?. My fourth book was a collected quotes and poems on title, “…109 Quotes, 07 Poems and a song of despair” (2009)…, similarly my fifth book was “20 Love Poems and the Economy Crisis” (2009) and finally the last book on title, “25 Sexy Poems” (2009). In short, I would say readers can take away great inspirations, love and knowledge from my books.

Most of the times, I write for myself, I wrote 20 Love Poems and The Economy Crisis, simply because of love, there is some kind of barrier between those who we love and those with whom we want to stay forever and also because of current recession. In case of love, especially in multicultural environment, I imagined a guy who comes from developing world into the developed world and falls blindly in love with teenager. The problem now is that the guy is adult and the girl is teenager. Especially this circumstance is a great hindrance and barrier in the starting of relationships. Therefore, most of the poems are based on this theme. I choose to write this book for such kind of lovers. In addition for also those lovers who just love and don’t see anything else except love.

I don’t know what I learned maybe courage, enthusiasm and persistence.

For writers each character and words are a favorite which is generally true from me as well, but if you want some specific lines for the readers then here is the one stanza from the book.

“So many poems on love,
So few touch me in heart,
I am no poet, life teaches it all
There are thousand love gurus,
There are millions love book,
I am simple ordinary lover,
All I need is, you!”
What one thing about writing do you wish other non-writers would understand?

What is true for me could be false for others and what is false for others could be true for me. Therefore it depends on every individual taste. Many books are there on how-to-write or many coffee table books but I think those are just useless. Just follow your heart with love, courage and persistence. Finally, Writing is …… (Fill in the blank yourself.), Similar to love.

To Selling your book, marketing and finding traditional publishers.

I can write 54 poems in two days and create a book.

1. I will end up writing six books currently living here in Finland within two years of time.
2. I would work in Nokia Research Center, Helsinki as a trainee and lose it all over again.
3. I will travel 500 kilometers like a crazy guy just to see someone who likes me a lot.

William Shakespeare for his work on Romeo and Juliet, Personally I would like to talk with him did he had such experience himself or was his just imagination? Secondly with Pablo Neruda because of his desperate melancholy tones in most of his poems And Finally, Great Paulo Coelho simply because of his inspirations and support for all new writers like me.

Do: Write, write and write

Don’t: Think too much before putting your golden words into blank paper.

Our theme for this month is AGENT HUNTING. Do you have any advice on finding a good agent?

Best possible way is to get in touch with publishing company directly and they can recommend you some agent. Or, just try your luck. Hopefully someone out there will be really interested to see your work.

Now, my seventh book could be semi-autobiography of myself from traditional publisher or else it could also be a collection of poems from self publisher Lulu.com But I don’t know yet. I believe every book has the beginning and end and when the life will begin for the book even creator does not know sometimes. It is just out there somewhere in the air, it has to come in my mind and then slowly the fingers will automatically start moving along the keyboards which will create the yet another book for readers.