BLOG TOUR: Trouble Down The Road by Bettye Griffin 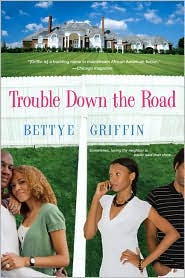 Suzanne and Brad Betancourt have a lot to be grateful for-their home, their children, and each other. They've even survived the fact that Brad's ex-wife lives next door and Suzanne's intrusive mother and siblings are just down the road. But Suzanne's confidence unravels at Brad's fiftieth birthday blowout, when young, voluptuous, neighbor Micheline brings a specially wrapped gift: herself. Suddenly, Suzanne feels like she's the one having the midlife crisis...

Hoping to impress Brad, and ease family troubles that are already straining their relationship, Suzanne goes into business with a friend. But the endeavor stretches her too thin, leaving Brad hurt and alienated. Soon he begins to distance himself from her-moving right into the waiting arms of Micheline, who is all too ready to ditch her own husband.

Now, with marriages on the line across the neighborhood, Suzanne and Brad will have to question their notion of loyalty to one another-and to themselves.

Can you give a brief overview of what Trouble Down The Road is about?

Bettye Griffin: Let’s see…secrets being found out, lies being exposed, marriages in trouble, misguided loyalties…does that whet your appetite for a good book to devour? Publisher’s Weekly calls it a “tart and torrid tempest” and says that “Those who crave their drama fast and furious will surely enjoy.” And the editor of the Black Expressions Book Club (Trouble Down The Road will be offered as a Main Selection in their catalog) told me her staff loved the scenarios the book addresses.

Even with that very un-romantic plot overview, it’s important for me to note that Trouble Down The Road is not a romance, but women’s fiction. When you write both, as I do, you want to do all you can to make sure readers know which is which…and there will no doubt still be some who will write to me and say things like, “That was no way to end a romance.” Sigh….

Is this a sequel?

Bettye Griffin: Yes, it focuses on characters first introduced in my 2005 novel The People Next Door. Also, the character of Micheline Mehu from Nothing But Trouble (2006) plays a prominent role (hence the title). If you haven’t read either previous book don’t worry; Trouble Down The Road contains sufficient backstory to fill readers in on what they need to know.

What prompted you to write a sequel after 5 years?

Bettye Griffin: I’ve never been big on the idea of the never-ending story that has sequel after sequel after sequel, from either a reading or writing standpoint, but I couldn’t forget the reader mail I received asking me to write a follow-up. I actually found the gap in time to be beneficial. Not only did the characters feel fresh to me after the long break, but five years later was a nice point at which to develop a new storyline, particularly in relation to the younger generation, who are now adults in their early 20s. This years-later follow-up is the type of sequel that works for me, and the reader in me is pleased to see that other authors are doing this as well: Donna Hill’s sequel to her novel Rhythms, Sandra Kitt’s sequel to the classic romance Adam and Eva, and Terry McMillan’s sequel to Waiting to Exhale.

Do you see yourself writing another sequel to this story 5 years from now?

Bettye Griffin: That answer will largely depend on reader response, so it’s too soon to know.

You write both contemporary romance and women’s fiction. Which do you prefer?

Bettye Griffin: Women’s fiction was always my first love. I started off in romance because it was what was open to writers at that time, but after just a few books I began to feel my collar tightening under the long list of ‘don’t’s.’ I had a story I loved that didn’t fit the mold (these days many romance novels are based on the premise of the one-night stand in order to get the hero and heroine in bed by page 40) and published it myself through my own Bunderful Books. I’m pleased to say that Save The Best For Last has met with positive response from readers, and Urban-Reviews.com named it as an Honorable Mention on their Best Reviewed Books of 2009 (my women’s fiction effort of last year, A New Kind of Bliss, made their Best Reviewed list).

What can readers expect from you in the future?

Bettye Griffin: I’ve been working on a synopsis that’s been kicking my butt for a complicated story that will be smoking, if only I can get it all worked out. I also see myself moving into more mainstream romance fiction, and I just completed a synopsis for a proposal to do just that (none of my previous mainstreams, Trouble Down The Road included, have contained significant romance threads). And I’m also working on another contemporary romance to be published by my own Bunderful Books. The rule I break here that would prevent this book from being published by a traditional romance publisher is having three very different romantic relationships unfold in a single novel.

What’s the best way to keep up with you?

Bettye Griffin: My website, http://www.bettyegriffin.com/ (you can read an excerpt of Trouble Down The Road there and sign up for my newsletter as well), my Facebook page, and my YouTube channel, http://www.http//www.youtube.com/user/bundie702, where my book trailers can be viewed.


If you enjoyed this post, please consider becoming a member of SORMAG's community - Join Today
Posted by LaShaunda at Saturday, April 24, 2010

Thanks so much for bringing your tour to SORMAG.

Much success to you.