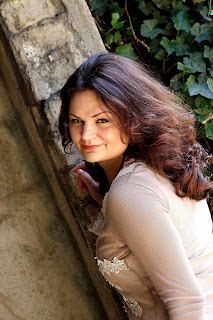 In 1998, Gina Holmes began her career penning articles and short stories. In 2005 she founded the influential literary blog, Novel Journey. She holds degrees in science and nursing and currently resides with her husband and children in Southern Virginia. Her debut novel, Crossing Oceans, is set to release summer 2010 with Tyndale House Publishers. To learn more about her, visit: http://www.ginaholmes.com/ or http://www.noveljourney.blogspot.com/

I began my writing career working on everything I could think of, from children's books to magazine articles to greeting cards with very little success besides an article here or there. It wasn't until I heard a girl, (yes, girl) in my church talk about writing her second novel that I even considered such a large endevear. But, I told myself, if a 17 year old can do it, so can I. And so I did. Although that first novel wasn't all that great, it still was good practice. As was books two, three and four before I sold my fifth work, Crossing Oceans.

What was your most difficult scene to write?

The most difficult scene is also one of my favorites. It's the scene my main character, Jenny, has to tell her little girl that she's dying. She takes her to the oceans and tells her to look for the other side. Of course the child can't see it. Jenny says, but there is one, even if you can't see it from here. Heaven is like there...

I cried every time I edited it. I'd cry again if I read that chapter now. It was powerful as a parent. Every parent can relate I think.

Ha. All I can think of is "I could have had a V-8." Let's see... I get wow moments every time I read a piece of fantastic fiction. Right now I'm reading The Help and thinking 'wow'. I've had early readers who are tough critics tell me how my book touched them and made them think about forgiveness, their own mortality and Heaven. Reminding someone that death for the Christian isn't so scary is a wow moment.

Well, I'm greedy, so alot. I hope to entertain people. I hope to touch their hearts and souls. I hope to remind everyone that forgiveness isn't optional, and that Heaven awaits those who believe. I want those who read Crossing Oceans to consider that it's not always about us, what feels good in the here and now but about the legacy we're leaving behind. Like I said, I'm greedy.

What’s playing on your CD while you’re writing?

Depends on the scene. While writing Crossing Oceans I listened to "A woman's work" over and over. You may remember the song from She's having a baby. It's a beautiful song. I also listened to Toad the Wet Sprocket's Walk on the Ocean. With the novel I'm working on now, I haven't needed to listen to music to get the right feel yet so I'm listening to my dog bark and kids laugh or bicker or whatever.

Hmmm. I'd like to hang out with Ann Lamot just because I think she'd be interesting to talk to. I like people who aren't b.s-ers. Stephen King would be cool too for the same reason and I guess Francine Rivers. Her books move me and I wouldn't mind telling her so in person.

What movie had the greatest impact on you as a kid? Why?

I loved Clash of the Titans. I watched it over and over, that and Legends. They were both Greek Mythology type fantasies. I think other than entertain me the grew my love for fairy tales.

If you could be on a Reality TV show, which one would it be and why?

Yikes. I'm not a big fan of TV and that goes for reality TV. I don't know. I guess Dancing with the Stars because then I'd have to get into shape.

I want to go to Israel. To walk where Jesus walk and to be baptized in the Jordan. I know it probably sounds pat and cliche but I'm truly burning to do this.

That even when I'm staring into space, I'm working. When I'm reading, I'm working. I'm sure writers look like terribly lazy people and the worst procrastinators and maybe that's true but not entirely.

What was the best advice you’d ever gotten about the publishing industry? The worst?

The best advice was to write what you know. I say this because of http://www.noveljourney.blogspot.com/ we ask this question and everyone's worst advice is just that. They argue that if they only write what they knew they'd be writing about their boring daily lives or whatever but I think that's not the point of "write what you know." To me, it's write what you know in your soul. With Crossing Oceans, I don't know what it's like to be dying or to have to tell the man who broke my heart that he's about to inherit the daughter I never told him he had, but on the deeper level, where it matters, I know loss. I know love. I know how afraid I'd be if I were dying. Afraid for myself and for the child I'd leave behind. I know bitterness and I know forgiveness.

The worst advice: someone I interviewed once said writing a book was just like writing a long letter without the salutations. I'm sure that was true for them but not for me.

Do: Go to writer's conferences. Don't: try to get published before the people who know the industry say you're ready. You get one chance to debut. Better to have it be on your tenth book that's fabulous than your third that's just okay. Readers have great memories. One chance. Make it count.

Those who know me say I'm a lot of fun. I pick at people I like constantly. I sing while I work without realizing it. I sometimes get dates waaaaay wrong like writing 1988 on a check instead of 2010. I have a lot of brain farts, though I doubt anyone would be all that surprised. I think writers are naturally scatterbrained. Our minds are always elsewhere.

Our theme for this month is GETTING THE CALL. Did you receive the call from the editor? What was the experience like?

Well, the call came in parts. First there was the call from my agent, Chip to tell me he was in negotiations. Then there was the call which was actually an email I received before my agent from Tyndale saying they accepted his offer, and then the sweetest call was when Chip called me at work and said, "Gina, it's okay to scream. We've got an offer."

Dry as Rain is the story of a couple struggling with growing apart, infidelity, love and forgiveness.

How can readers get in contact with you? (mail, email, website)
www.ginaholmes.com I have a link they can clink that goes directly to my email. 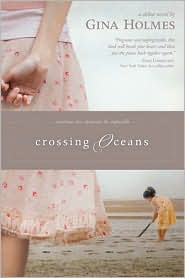 Jenny Lucas swore she’d never go home again. But being told you’re dying has a way of changing things. Years after she left, she and her five-year-old daughter, Isabella, must return to her sleepy North Carolina town to face the ghosts she left behind. They welcome her in the form of her oxygen tank–toting grandmother, her stoic and distant father, and David, Isabella’s dad . . . who doesn’t yet know he has a daughter. As Jenny navigates the rough and unknown waters of her new reality, the unforgettable story that unfolds is a testament to the power of love and its ability to change everything—to heal old hurts, bring new beginnings . . . even overcome the impossible. A stunning debut about love and loss from a talented new voice.

If you enjoyed this post, please consider becoming a member of SORMAG's community - Join Today
Posted by LaShaunda at Friday, April 23, 2010

Thanks so much for being our featured author. I look forward to reading your book.

Much success to you.