Cheryl Faye recently returned as a resident to Harlem, New York, where she was born and raised and is an active member of First Corinthian Baptist Church. A legal secretary by profession, Cheryl is the proud mother of two sons, Michael and Douglas, and grandmother to Mikayla. Cheryl has five previously released novels; Be Careful What You Wish For, released in Spring 2005 for Strebor Books International, First Love and A Test Of Time for BET Books, and A Time For Us and At First Sight for Pinnacle Books, an imprint of Kensington Publishing. Her short story, A Second Chance At Love, was included in a Mothers’ Day anthology Mama Dear, for Pinnacle Books.

Who Said It Would Be Easy? is her first foray into the Christian fiction genre, but Cheryl believes she has definitely found her niche.

Cheryl can be reached at MsCherylFaye@gmail.com or on Facebook. Please include a subject matter in your message. No attachments, please.

I’ve been writing since I was a teenager. Writing has always been something I’ve done for my own comfort, pleasure and escape, however, my first attempt at writing a full-length book was on a bet with my ex-husband. That wager opened up a flood-gate that hasn’t been closed yet.

In writing Who Said It Would Be Easy? I learned that nothing happens before its time. I began writing this story in 2001 and it went through a major transformation right along with me. This story was not supposed to be published before now.

My hope for this book is that it represents the best of who I am—the me God created me to be—right now. I am growing everyday and what I’ve done in my life up to this point doesn’t begin to touch the surface of what I’ll do before I leave this earth. God’s not through with me yet; I don’t know all of His plans, but I’m looking forward to finding out.

Stefàn Cooper — for me, he is the embodiment of my ideal black man (I love my brothers). Although his outward appearance is darn near perfection (the brother’s fine), the flaws he has hidden so well and from so many, are brought to the surface by the light of the love he receives from Charisse and really show his humanity and give him a safe place to be himself. (I have a painting on my living room wall that I’ve named for him.)

That other people are willing to spend their hard-earned money to buy something I’ve written. I am truly humbled by that.

I love creating my characters. I live somewhat vicariously through them, although not so much now as I did when I was younger. I’ve always been a “people” person and I try to create characters that I would enjoy having in my life.

What I dislike the most about the writing process is the work it takes to sell my stories. Unlike some authors who will talk up their work to just about anyone they meet, I am very reticent about doing that because I’m somewhat embarrassed to talk about myself like that.

1) That my mother knew what she was talking about—I could have saved a lot of time and avoided a lot of heartache; 2) that everyone doesn’t appreciate my honesty and outspokenness—sometimes it’s better to just be quiet; and 3) that God is always with me, even when I feel completely alone.

Do believe in yourself enough to get the help you need to be the best writer you can be.

Don’t take rejection letters too personal; if you’ve done what you need to do to be the best writer you can be and you’ve written a well-crafted story, that rejection letter is only the opinion of the person who signed the letter.

I wish non-writers would understand that just because you think you have a great idea for a story, doesn’t mean that I’m the person to write it for you. I’ve had so many people come to me and tell me they have the perfect story for me to write. That’s not the reason I do this; my stories come from my heart and, presently, I’m not looking to write anyone else’s story.

Hester Wyatt from Beverly Jenkins’ book, Indigo, mainly because Galen Vachon, a/k/a The Black Daniel, is my absolute favorite hero of any book I’ve ever read and I’d love to be loved by him. LOL

I love serving at my church. I am part of the leadership team at First Corinthian Baptist Church in Harlem where our pastor is Michael A. Walrond, Jr. and although that occupies a lot of my time, I love being there and being a part of the work that is going on there. I also love to read, watch movies—at home and the theater—and I enjoy playing computer games (sometimes a little too much).

Our theme for this month is Resources On The Net. What are your favorite resources on the net?

One of my absolute favorite resources is www.dictionary.com. I love words and whenever I come across one I don’t know, I can access that site via computer or on my phone and learn a new word. It’s also great when I’m writing and don’t want to use the same word repeatedly to convey a similar thought because of the thesaurus feature.

I know for sure that I am the beloved of God, that God’s spirit rests on me and that in me God finds favor simply because I am part of a wonderfully loving family with the best parents in the world (now deceased), the mother of two amazing sons and because I’ve had the privilege of having six stories that I’ve written touch the lives of those they have.

My next book, tentatively titled Saved By Grace is the story of a widow named Ruth Morgan, who has spent the last fourteen years of her life singularly focused on raising her daughter, Grace. In the years since Grace’s birth, Ruth has never even considered the idea of falling in love again, especially since her husband’s death came on the night he left her for another woman. Now, with Grace growing up and needing her less and less, Ruth has to decide if she wants to spend the rest of her life alone or take a chance on a love that won’t betray her again.

I can be reached via email at mscherylfaye@gmail.com; or at the following social network sites: www.facebook.com/cfaye127; www.twitter.com/cfaye127. I can also be reached through www.goodreads.com/cheryl_faye. 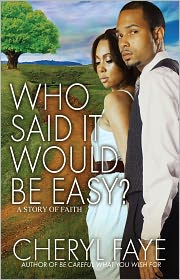 Who Said It Would Be Easy? A Story of Faith

Who Said It Would Be Easy? is a journey along the path of life’s trials, tragedies and triumphs.

Charisse Ellison is a single professional who is new to her faith, but convinced that her relationship with God is the only way to the have the truly fulfilling life she desires – one that includes a husband and children.

Stefàn Cooper is a bachelor who has no desire to change his marital status. Tall, muscular and strikingly handsome, Stefàn is so used to getting what he wants from the opposite sex that he has come to expect a certain demeanor upon first encounters and is intrigued by Charisse’s indifference to his charms.

With the sincere yet cynical voice of her best friend constantly in her ear, and the encouragement of his humble, discerning running buddy, the couple embark on a cautionary friendship that quickly leads to an intense romance. Their relationship takes them through trials that challenge the bravado Stefàn has held on to for most of his adult life and forces Charisse to see that God’s answered prayers don’t always come packaged the way we expect.

Do you need help with your promoting? - http://sormag.com/advertise.htm
Posted by LaShaunda at Monday, February 21, 2011