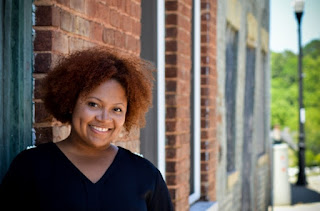 Michelle Mitchell has always been creative; the builder of play forts, and the writer of numerous songs that she hoped to hear on the radio. She always enjoyed singing, dancing, reading and writing. One of her dreams was to be a backup dancer for Janet Jackson, but when that didn’t happen, she continued to focus on songwriting. She knew she could shine brightest if she could work in a field where she could create, but she had an awkward start in finding her voice.

A Georgia native, Michelle attended Georgia Southern University where she majored in Communication Arts and minored in Journalism. After graduating, she had a short stint as a feature writing before returning to school and entering corporate America. Needing a creative outlet in between courses, Michelle got inspired and began working on her first novel, Truth Is.... After sending out several queries, she was humbled to receive an offer to write for Jacquelin Thomas Presents, an imprint under Brown Girls Publishing.

When she’s not writing, she enjoys trying new restaurants, traveling, and reading. Michelle is a diehard fanatic of the Atlanta Falcons and Atlanta Hawks. She still resides in Georgia, where she is a member of Pilgrim Baptist Church in Marietta. You can write her at
authormichellemitchell@gmail.com. 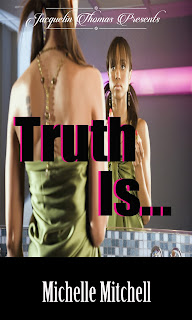 New relationships are exciting—until they aren’t. What happens when all the things left unsaid in a new relationship, come to the forefront? Can a lack of disclosure close the door on love or will the truth lead to a second chance?

These are the thoughts swimming through Ansley Wright’s head as she explores her heart when Davis Montclair enters her life. Burned by hasty decisions in the past, she’s reluctant to give him a chance, but the heart wants what it wants.

Davis Montclair, a man burdened with a troubled past, was not looking for love, but when he laid eyes on Ansley he would stop at nothing to have her as his woman.  It seems the weight of the world is on his shoulders, as he tries to balance the drama that follows him at every turn as he fights for a chance at love and redemption with Ansley.

As they try to battle through the barriers thrown at them, they will have to question if the truth will really set them free.

What inspired your book?

I was in grad school when I first started working on this manuscript. During that time, the reoccurring theme in the news revolved around men and women who were mislead or misinformed about the person that were dating. From the pastor who spread HIV to unsuspecting women, the emergence of the dating website Don't Date Him Girl.com, which allows women to post details about their terrible dating experiences....there was a common theme. These men and women built relationships with people who they thought they could trust. Which led me to think about, the mask we where when we are dating someone. Not everyone does this, but for those who do, what's the truth behind the dating facade people wear when they are first meeting someone and what consequences come with rushing into relationships. Everyone is so eager to have love, that they often ignore the warning signs that are right in front of them.

I hope readers will be encouraged and realize the importance of self-awareness, self-respect, and second chances.

I enjoyed writing about Simeon. She's beautiful, smart, and goes after what she wants, but behind her power, there's a vulnerability. I can't wait to see if readers will root for her or tear her apart. From the few that have gotten a chance to read the first three chapters, it does not look like she will win any popularity contest.

I learned that I write "so" a lot. I still have some developing to do, but I'm realizing I like a bit of mystery and drama. In real life, I like to laugh, but I created some characters who lead drama-filled lives. Self-inflicted, drama. I also learned that I didn't want to sacrifice any characters, meaning if they behaved badly, I didn't want one character to be so mischievous but I learned you can't get too attached.

Three things that I wish I would have known before getting this opportunity are:

How to write enticing back cover copy. I think this may be due to my being too wordy, because the back cover is short and should draw the reader in quickly.

How to set a writing regiment and stick to that routine daily. I haven't figured out a routine just yet.

What advice would you offer to someone whose first book is about to be released?

Jacquelin, Reshonda, and Victoria are always encouraging us to continue to learn and build our craft. My advice would be what I've taken from them, which is to read style books, take courses, read the works of other authors, and don't take critique too personal, it can help you grow as a writer.

I'm a shy person and creating has always been a outlet from singing to writing songs...drawing, etc. But I've never been placed in a situation where my words had to stand on their own. It's like exposing yourself to the world. I've written for a publication but I wouldn't compare the two. As my release date approaches I feel excited and very naked.

What are your three favorite social media platforms and how are you using them for promotion?

I know that pain is temporary, and that I have to push ahead through the hurt to see the rewards.

Anything you'd like to say to the readers of SORMAG?

My debut novel, Truth Is... under the Jacquelin Thomas Presents imprint, with Brown Girls Books, will be available April 26. You can also read my story, Plot to Take Over Washington in The Ex-Chronicles anthology being released on March 8, from Brown Girls Publishing. I truly hope you will enjoy those stories. Thank you.