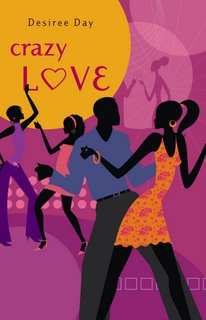 Crazy Love - Desiree Day
CHAPTER 1
What I Want in a Man
1. Must be nine inches or bigger
2. He must be six feet, one inch or taller
3. He must have light eyes, green or gray
4. Must have soft curly hair—none of that nappy shit
5. Gotta have Shemar Moore’s cheekbones
6. Gotta be able to wear a mesh
muscle shirt and look good in it
7. His ride gotta be phat
8. He must be making at least $80k (after taxes)
9. No kids—I don’t need any baby momma drama
10. He’d better be a freak in bed
Stacie Long ran her index finger down the list and mentally placed a check mark after nine of the items. This was her list. The nonnegotiable items she wanted in a man. It had been revised, scrutinized and analyzed more than Bill Clinton’s love life. A frown marred her pretty face, so much so that the space between her eyebrows looked like a halved prune. She was draped across a velvet couch, reviewing her list as if it was the Holy Grail. So intent on her list, she missed the hateful glares that were shot at her from the women who wanted to sit and rest their feet.

“Nine out of ten…not bad. Not bad at all,” she said, laughing softly. Her body tingled with excitement. If she hadn’t been sitting in the ladies’ lounge in the Marriott Marquis in downtown Atlanta on New Year’s Eve, she’d be howling with joy. Right now all she dared was a smug laugh. It was too easy…way too fucking easy, she thought.
Men usually sniffed after her the same way a fat man sniffed after a Big Mac, with desire, longing, greed and lust. At five-feet-nine and one hundred thirty-five pounds, she was all woman; the red sequined dress she had slithered into earlier that evening loved her because it hugged every inch of her body. The color of warmed honey, with high cheekbones and full lips, she had a butt that made many a man stop dead in his tracks. Depending on when you saw her, her hair was either grazing her shoulders or kissing her ears. Tonight, she had it parted in the middle and the bone-straight strands framed her artfully made-up face. Blush lingered on her high cheekbones; fire engine red lipstick glistened on her full lips and little sparkles glittered playfully on her mascarad eyelashes.

Two women dressed to the nines were standing a few feet away from Stacie. Their heads were so close together that they looked like Siamese twins. “You know what? You can’t take us out anywhere, look at her,” muttered the one wearing a pair of toe-pinching shoes. “It wouldn’t surprise me one bit if I saw her walking out of here with a plate of food. I bet she has a roll of aluminum foil in that Wal-Mart–looking bag of hers.”

“Mmm,” the other one agreed. “We should tell her to get her ass up!”
“Yeah!” The lady in the toe-pinching shoes hissed to her friend. But neither moved. Instead, one reached into her purse for lipstick. The other grabbed her cell phone and shrugged lightly; who needs a fight on New Year’s Eve?
Stacie snuggled deeper into the plush cushions. A satisfied gleam brightened her eyes. This was her type of party. Men, fine men, were everywhere for the taking, fine, wealthy men, that is. They were like apples on a tree, hanging around for the picking. Atlanta had a lot of them. Not only that, but only the crème de la crème attended Atlanta’s Annual Sexy and Sultry New Year’s Eve Bash. So far she had spotted the mayor doing her thing on the dance floor, former Ambassador Andrew Young and Denzel Washington huddled together near the buffet and a former child star working the room like a twenty-dollar-an-hour whore. Yep! This was her type of party.

It was only ten o’clock, but her evening purse was bulging with business cards. Where other ladies had to work for the numbers, men nearly threw their cards at Stacie. She’d hold on to them and sort through them tomorrow morning. Then she’d organize them by jobs—doctors, lawyers and professional athletes on top, everybody else on the bottom. But tonight, she’d gotten the one number she’d been chasing for the past six months, Crawford Leonard Wallace III. An NBA player, and a multimillionaire, his family was well known and respected in Atlanta. Single, six-foot-seven, curly, sandy-colored hair and hazel eyes, he was as fine as Shemar Moore and sexier than Michael Jordan.

Stacie was so excited that she shimmered, and that’s how her best friend and roommate, Tameeka Johnson, found her: stretched out on the couch and wearing a grin so wide that it looked painful. “Whassup with the grin? You look like you just found a million dollars.”

“You close, girl. Very close,” Stacie crowed gleefully. She didn’t say anything for a couple of seconds, but then her secret started bubbling up and she whispered to Tameeka, “You are not gonna guess who I met tonight. You’re not gonna guess. I know you’re not,” she taunted her friend. Before Tameeka got a chance to reply, Stacie blurted out her news and a collective gasp of envy went up throughout the lounge, followed by dead quiet. All ears turned to Stacie.

“Oh, is that all?” Tameeka gave Stacie a dismissive wave of her hand. “I thought you had hooked up with a ten-incher. That’s cool, girl. So you finally snagged your baby’s daddy. He’s aw’ight, but I’ve seen better.” Tameeka sniffed then turned to the mirror and pretended to check her makeup. She was really watching Stacie’s reaction to her reaction and trying to suppress a laugh at the same time.

Where Stacie was drop dead gorgeous, Tameeka was borderline pretty. The color of creamy peanut butter, five foot five and one hundred seventy-five pounds, she was rarely treated to a head-swiveling, tongue-dropping look from a man. If she did, it was because his eyes zeroed in on her size 44D breasts.

“Meek!” Stacie wailed.
Tameeka couldn’t hold her laughter any longer. “You know I’m only playing, girl,” she said. “Whassup? Have you whipped that Stacie magic on him yet?” she teased good-heartedly.
“Oh, I’ll do that later,” Stacie answered in a voice dripping with confidence. “Maybe sooner than later,” she said.

Then she looked around at the other ladies, who were all pretending not to be listening, and said very loudly, “He’s a ten-incher or more,” she boasted. “Dude got three legs. I can tell these things. Some women look at the shoe size, I look at the finger width. If he got thick fingers, then he got a thick di—you know what. The pants were loose, but it was in there!”

“Girl! You gotta get a piece of that. If you don’t somebody else will,” Tameeka threatened.
Stacie gave a short nod. “Hey, what about you? You didn’t meet anybody, did you?”
“I did too meet somebody,” Tameeka answered defensively, and then suddenly laughed when she realized how juvenile she sounded. “As a matter of fact, I met a lot of somebodies. You’re not the only one who got it going on tonight,” she answered as she bowed her head and hid a nervous grin. Tonight, she’d met her soul mate.
“Oh really? Do tell,” Stacie encouraged. “There are a lot of fine men out there. So which bodies did you meet?”
“I’ll tell you later,” she said, then changed the subject. “So whassup? Why are you sitting in the bathroom talking to me, when you got Mr. Wonderful on the other side of the door waiting to sweep you off your feet?” Tameeka asked, eager to get back to her new guy friend; she didn’t want to leave him alone too long, the women were vicious. Something about New Year’s Eve turns a woman into a man-stealing, I-don’t-want-to-spend-the-rest-of-my-life-alone ho.

“I know, girl! Give me a minute, Meek; I need to run to the bathroom,” Stacie called over her shoulder as she rushed past a group of preening women.

Inside the stall, Stacie let out a long breath and frowned. She had promised herself that she wasn’t going to do it tonight. The day before she had done it twenty times, and yesterday she’d done it eighteen times and earlier today she’d done it seventeen. Her face glistened; the makeup couldn’t hide the sweat that popped out over her face. Her palms became sweaty and she rubbed her hands together in an attempt to dry them; it didn’t work, they only became soggier. She prayed silently to herself that the urge would pass. But it didn’t. As she knew it wouldn’t. Instead, the urge continued to grow. It seeped into her body like a nasty virus, and there was only one way to assuage it.

“I have to do it,” she said in a tortured whisper, then snatched off her right shoe, a red strappy number, and brought it up to her nose. She inhaled deeply, and then took nine more quick sniffs as a calm came over her, blanketing her with a confidence that almost covered her shame…almost. The left shoe was next and the smell was even sweeter. She felt reborn. And it showed. Her face glowed; her pulse slowed and a crooked smile graced her face. Eyes sparkling, she pushed open the stall door.

“Let’s show the brothas how we do it!” she said as she grabbed Tameeka’s arm, then strutted out of the room.