EXCERPT: PLAYING IN THE DARK 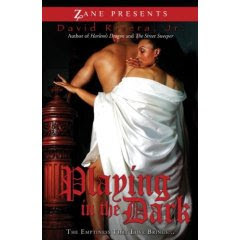 PLAYING IN THE DARK
by David Rivera

The irresistibly sexy, Chemah Rivers is in pursuit of a ruthless killer whose sole purpose is to destroy the highly celebrated NYC detective. The ensuing chase blazes an international path of deception and destruction strewn with broken bodies and souls. There are no limits to the quest for ultimate possession, including using those Chemah holds most dear as pawns in this deadly game of cat and mouse.

From the opening seduction to the final love scene, Playing in the Dark is a cover-to-cover read - sure to keep new readers up well past their bedtimes and draw avid Chemah fans deeper into the Dragon's den

Bereft wound his way through Sodom's crowded streets. He was enjoying the powerful new body he recently acquired. It belonged to a Kemetan slave trader who strayed too far from the spiritual path of his ancestors. Bereft could only possess and corrupt the wayward, but that was not a problem as he could identify those who were open to him easily enough. He had found this one in a house of the most ill repute. The Kemetan was brutally bending the fallen woman's body to his will and Bereft decided to continue fornicating with the whore when he entered the slave trader. The Kemetan was holding her one leg behind her neck and was convulsing a torrent of semen into her when Bereft entered him. The pain in her face was intoxicating to Bereft. The woman was a worthwhile prize and Bereft would have taken her instead if not for her missing leg and his need for a male body at this time. The woman noticed the change in her temporal lover instantly when she saw the passion in his eyes replaced by malice. Bereft would have gotten pleasure from choking the life from her at that moment, but decided to save her for another time. Maybe tomorrow he would come back and break her other leg off. He would fuck her with it, he thought, as he jumped off of her laughing. The woman scampered across the dirty floor to the farthest corner in the hut. Bereft laughed at her fear, absorbing the power he drew from this human emotion.

Bereft's promise to Lot's daughters was a simple one. He would come back to them in a form other than that of the woman he seduced them with the night before. In return they would allow him to secretly observe their father's consecration rituals for fellowship with God. Bereft was convinced that if he could understand God's relationship to men, specifically why God granted them so much mercy and how Lot received his power from God, he would be able to somehow take the power away, harness it for himself, thereby guaranteeing his control over Sodom.

In this city, where every soul was doomed to be lost, any and all spirits could run rampantly without ever being contested, but that freedom was not enough for Bereft. He wanted the absolute authority that came with sovereignty that came with deification. Bereft was recklessly ambitious, he wanted to be more than king of Sodom. He wanted every soul in Sodom subject to his will. He wanted to be a god—adored and worshipped incessantly. Bereft and his four brothers made a grave wager that had driven all but him from this city thus far. It appeared to be an easy bargain. Each brother had one attempt at separating Lot from God. A failed attempt meant banishment from the city forever. His brothers had tried and all had failed. Bereft was the last to try. His attempt at seducing Lot had to be calculated and precise, lest his try at the halo over Lot's head be as futile as his brothers' had been. If he failed this one time, the wager would be null and his brothers would be allowed to return and the city. Sodom would never be his to rule alone.

Lot's daughters, Shelena and Miriam, were waiting for Bereft behind the small shack where the animals were kept. The girls, who were ages twenty and twenty-one respectively, were no match for Bereft's seductive nature. He winked and smiled at them and they knew him as soon as they met his gaze. His eyes were always the same. They smoldered with malevolence. The icy evil in his eyes had a chilling but hypnotic effect on all who looked into them. Despite Bereft's transformative powers, he could not change his eyes or their sinister gaze.

Shelena and Miriam were old maids by the standards of their tribe. Most considered it a sin that they lived with their father without husbands or children. They felt it was disgraceful that their father had not already married them off. They were more beautiful than any other women in the city and they looked so much alike that everyone thought they were twins. Both had olive skin that held no blemishes, their eyes were green like emeralds in pools of water. Their mouths were full and red, yet they wore no paint on their faces. Each had hair so black and thick that all women who saw them were instantly jealous.

Their father, Lot, left them and their mother on many occasions while he went into the mountains to commune with God. When he was gone for long periods, the girls secretly watched their mother entertain assorted men in their father's bed when she thought they were asleep. She allowed men to put the hard fleshy meat they kept between their legs into the soft wet opening between hers. At first, the exhibitions frightened them, the way she would grunt and scream when the men with the biggest flesh under their robes would ram themselves into her. After a time they came to realize that those were the men their mother favored the most. She enjoyed spending time with them and the girls watched and learned the joys of being with men through their spying.

When Bereft left Shelena and Miriam yesterday, they were in a sweated heap on the floor of the stable behind their home. He had introduced them to his body, which at the time was that of a twenty-five-year-old woman whom he had possessed after watching her fornicate with her husband's best friend. First he plied them with wine, knowing that after their hard work with the animals, it would be enough to erase all of their bewilderment at the responses their bodies would have to the lewd acts to be performed. He teased them both with his fingers, simultaneously entering them with the longest digit of each of his hands as they lay on the hay-strewn floor with their legs opened wide. When he brought them to the edge of ecstasy and they could take it no longer, Bereft bent his head to Shelena's venus and placed the full mouth that was now his against the lips that hid her birth opening. Miriam recognized the look on her sister's face immediately. She had seen that look of rapture on her mother's face quite often. She couldn't wait to have this woman's mouth on her birth opening too. When it was her turn, she thrust her hips into the face of the wanton woman boldly. She spilled such copious amounts of fluid into the woman's mouth that she thought at one point that she might be urinating unwittingly.

Now Bereft came to them as a large, onyx-colored male with the features of the royal family of Egypt plainly upon his visage.

"Do you recognize me, Shelena? Miriam?" he addressed one, then the other.

The two young women spent last night in the corner that they shared in their father's hovel, quietly giggling at the crazy woman's claim of having the ability to change her form to that of a man. They discussed, in hushed tones, the experiences they had sharing their bodies with the woman who called herself Bereft and how she succumbed to their beauty, devoutly worshipping their flesh. They fell asleep in a dilemma of guilty pleasure, vacillating between dread for the acts they committed and desire for another encounter with Bereft.

Now Miriam and Shelena stood still as Bereft came toward them. The sisters were frozen in fear. There was no doubt in either of their minds that the entity in front of them and the being who had seduced them yesterday were one and the same.

Bereft held his hand out to Miriam and she could not stop her feet from going to him. Shelena wanted to run, but she found his eyes latched on to her soul and knew that her will was his. When Miriam reached the spot where Bereft stood, he only slightly touched the top of her head and she dropped immediately to her knees in front of him. The front of his robe was frighteningly extended from his waist and she knew the man flesh beneath the robe was more than she or her sister had ever witnessed while watching their mother's affairs. Bereft grabbed a handful of Miriam's hair and pressed her face into his groin. She felt the length of him press against her face, from the tip of her jaw past the top of her head. He kept her face pressed against him as he pulled his robe over his head with his other hand. The fabric of the tunic was rough, scraping her lips raw as he drew it up slowly over his head, taking care to ensure Miriam could not move away. As the fabric gave way to flesh, Miriam's mouth dropped open in astonishment.

Bereft wasted no time. He saw the chasm of her mouth and thrust forward. Miriam's mouth snapped closed in time to keep from being filled.
Posted by LaShaunda at Monday, April 28, 2008