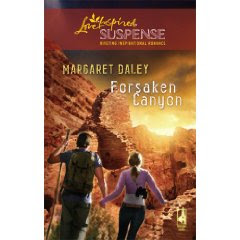 ISBN# 0-373-44309-9
Publisher Steeple Hill Love Inspired Suspense
Genre romantic suspense
Copyright October 2008
Published date same
Where it can be purchased http://www.eharlequin.com/store.html?cid=241
(eharlequinn)
http://www.amazon.com/s/ref=nb_ss_b?url=node%3D1000%2C23%2C13391%2C13432&field-keywords=margaret+daley&x=0&y=0
(Amazon)
Website http://www.margaretdaley.com/
"I'll arrest you." So threatens the tribal chief of police if Kit
Sinclair dares enter Desolation Canyon alone. Hawke Lonechief insists
it's too dangerous. He lost his wife to the treacherous canyon. He
knows the ancient ruins Kit seeks aren't worth her life. But Kit is
sure all that hiking and searching will help put her traumatic past
behind her. When she risks Hawke's wrath by going alone, he finally
agrees to lead her. On his terms. Impossible. Because someone else is
following their every move. Watching them grow closer to danger with
every step...

The Guardian wished he hadn’t been forced to do this, but someone had to save Kit from her fiancé. She was just too naïve and trusting.

Comfortably hidden in the shut-off balcony of the church, he lined up his sights on the rifle and aimed for the man’s heart. The sounds of the wedding march reverberated through the large nave. With precision and preparation he would succeed, and one day she would thank him.

Her fiancé stood on the steps to the altar, facing the center aisle. The smile the man gave Kit—as though he really loved her--chilled the Guardian. She deserved so much better.

This is for you, Kit. He squeezed off the shot.

Kit Sinclair bolted straight up in bed, darkness pressing in on all sides. Her lungs burned as she dragged air into them. The sound of her heart pounding in her ears like the roar of a powerful storm.

Just another nightmare. I’m safe in my bedroom.

But the thought didn’t assuage the terror that constricted her chest as if she were standing in front of the altar right now. She could still see the red stain fanning outward on her fiancé’s snowy white shirt and Gregory’s hand reaching out to her. The screams in the church resounded through her mind. The scent of her fiancé’s blood filled her nostrils as though she were still holding his body clutched to her.

Will I ever be free of the memories, Lord?

She raked a wavering hand through her sweat damp hair then reached for the lamp on her bedside table. After two failed attempts, she finally managed to pull the chain, and a soft glow flooded the black recesses of her room. But her mind still remained in the clutch of darkness, had since the day her fiancé had been murdered right in front of her two years ago.

Glancing at her clock, she noted the time and realized she’d only gotten a few hours of sleep. She flipped back the sheet and climbed from the bed. She might as well work since she had to get up early anyway to make her meeting in Santa Maria Pueblo this morning.

Thankfully she had something to concentrate on other than her past. She could do nothing about what had happened, but she could prove her theory was right, hopefully with the help of Zach Collier’s cousin. If not she would find another way. Her job at the college depended on it.

Hawke Lonechief finished the dregs of his coffee and motioned for Anna, the owner of the café and his cousin, to refill it. “I’m gonna need it this morning.”

“How can you tell?” Hawke took a tentative sip of the black brew, relishing its strong flavor, just the way he liked it, no sugar, no cream.

“Cousin, we grew up together. I know when you haven’t gotten any sleep. Do you ever see your mother?”

“Sure, we had dinner together two nights ago.” And his mother had basically read him the riot act although in her case it was mainly said with her usual few words. She was worried about him, but his work held the haunting memories at bay.

“You’re the chief of police so why are you doing everything down at the station? What are the other officers for?”

“Nothing, if in moderation. But you don’t know the meaning of the word.”

He grinned. “Sure I do. It means steering clear of any excesses. I don’t have time for excesses.”

“You don’t call practically living at the station an excess?” She fluttered her hand in the air. “Nope. Don’t answer that. I never could change your mind while we were growing up. I don’t know why I even waste my breath trying to now.”

“I’m responsible for the safety and well being of thousands of people. I don’t take that responsibility lightly.”

“And you shouldn’t, but what about your mother? Have you left Aunt Evelyn to fend for herself on the ranch?”

Stung by the rebuke of his well-meaning cousin, Hawke straightened in the booth and cupped the mug between his hands while he drank some more coffee. “Charlie’s wife got sick. Somebody had to take care of his small children. I couldn’t ask him to take his usual shift last night.”

Anna wagged her head. “There’s always something with you. Go home. Get some sleep.” She sent him a quizzical look. “You are going home, aren’t you?”

“Yes, I am as soon as I meet with someone. Then home it is.”

“Good because that ranch is too much for Aunt Evelyn alone.”

“That’s why I hired some more help.”

“Good. He’s reliable. She needs someone who is.”

“Ouch.” The persistent reproach in Anna’s voice needled Hawke. “As I told you, I have responsibilities I can’t shirk.”

“I know and we appreciate it. Crime is down at the pueblo since you took over as police chief. But we both know what this is really about.”

The door to the café opened, and a petite woman with long blond hair tied back in a ponytail entered. Hawke zeroed in on her rather than continue the conversation with Anna because there was no way he would get into a discussion with her about that.

The attractive woman scanned the tables and booths until she found him and then immediately headed in his direction. As he watched her move with assurance and economy, alarm bells—bells he usually listened to--went off in his mind. What had possessed him to agree to meet with this woman? He should have told his cousin, Zach, no.

Behind the pleasing features, he glimpsed a woman on a mission. The determined set to her chin and the focused look in her blue eyes alerted him to be wary. He didn’t need trouble. He’d had enough of that to last him two lifetimes.

Exhausted from no sleep in twenty-four hours, Hawke tried to paste a semblance of a smile on his face in greeting. Once he made a commitment he didn’t back out no matter how much he wanted to. The corners of his mouth twitched in protest. He gave up and rose instead.

“Yes, you must be Zach’s cousin, Hawke Lonechief.” She grinned and took his hand to shake.

The brief, firm exchange didn’t relieve the tension building in his gut. He waved his arm toward the seat across from him. “Please sit.”

After she slipped into the booth, Anna, who had been hovering on the side observing the meeting with more interest than Hawke would like, approached. “What can I get for you?”

“I’ve heard great things about your coffee here at the café from Zach Collier. That’s all I need.” That and the man across from me to agree to be my guide to Desolation Canyon.

“I’m a professor of history at the Albuquerque City College. We have worked together on a few projects.”

“Science and history working together?” The waitress poured a mug full of the wonderfully fragrant coffee.

“Thank you.” Kit lifted the cup to her mouth and drew in a deep breath of the aroma, one of the best smells in the world especially when she had tried to avoid sleeping as much as possible. She could use the whole pot after the night before. “I helped Zach with some of the history behind his Aztec codices, at least the part that involved the Spanish conquistadors. That’s one of my specialties.”

Normally she wouldn’t go into so much detail except that she wanted the man across from her to know the information. Zach had told her Hawke Lonechief was the best person to help her, possibly the only one. He knew every square foot of Santa Maria Pueblo, and he could survive where most people couldn’t. The place she wanted to go to wasn’t called Desolation Canyon without reason. It was a hard, rough, barren land.

Like your life. The thought came unbidden into her mind. She shoved it away.

After the waitress left, Kit lounged back against the cushion, trying to relax her taut muscles. Even running through the mental relaxation technique a friend had taught her did nothing to alleviate the stress mounting in her as she got closer to discovering if her theory was right or not. Nor was imagining herself on top of a mountain, looking out over a beautiful vista right before the sun went down doing the trick—not when dark brown eyes studied her with an intensity that stole her breath, her composure.

She did her own survey of the man. He was dressed in tan slacks and shirt with an emblem indicating he was a tribal police officer. His short black hair surprised her. She had pictured him with long hair on the hour drive from Albuquerque. What else would surprise her?

“Now that we have finished sizing each other up, why do you need a guide? Zach didn’t tell me much. Just that you two worked together and you were a friend.” Hawke finished his coffee and set it on the table.

Direct. She liked that. “I’m looking for evidence of the Lost City of Gold.”

“Who isn’t? But at Santa Maria Pueblo? I don’t think so.”

The territorial tone of his voice warned her this might not be an easy sell. “I think there was a lot of truth to the legend that sent Coronado all over the Southwest looking for it. Working with Zach and what I discovered while in Spain researching the topic for my dissertation has only reinforced my conviction, which has grown the past several years.”

One corner of Hawke’s mouth hitched up. “Sure. Who wouldn’t want to find a place so full of gold that all your worries would be taken care of.”

She stiffened at his mocking tone, but she realized after all this time the tale did sound farfetched. “I think there was a place that prompted the legend, but I’m not saying it exists today as it did five hundred years ago or that it was as grand as the story said. If it did, it probably would have been discovered.”

He folded his arms on the table and leaned forward. “Do you make it a habit to go around telling people you’re looking for the Lost City of Gold?”

“No,” she said with a chuckle. “They would think I was mad.”

“No, sorry to disappoint you. I’m perfectly sane. But I need a guide, and Zach said you were the best, that you helped him and Maggie last year with the Aztec codices. I trust Zach’s opinion.”

“You shouldn’t.” His almost black gaze drilled into her.
Posted by LaShaunda at Sunday, November 30, 2008