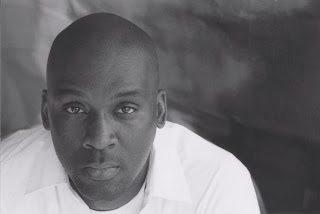 Derrick D. Barnes is a native of Kansas City, MO., although he spent a good portion of his formative years in Mississippi. He is a graduate of Jackson State University with a degree in Marketing. He is the author of the children's books STOP DROP AND CHILL, and THE LOW DOWN BAD DAY BLUES published by Scholastic (2005). He is also the author of a young adult novel entitled THE MAKING OF DR. TRUELOVE (Simon Pulse 2006). But his mega, super, Scholastic series RUBY AND THE BOOKER BOYS is what he hopes be known for eventually. He is also known for writing best selling copy for various Hallmark Card lines and as the first African American male staff writer for Hallmark. Derrick recently relocated from New Orleans, LA to Kansas City, MO with his wife, Dr. Tinka Barnes and their sons, Ezra, Solomon, and Silas. 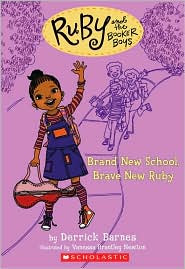 Eight-year-old Ruby Booker is the baby sis of Marcellus (11), Roosevelt (10), and Tyner (9), the most popular boys on Chill Brook Ave. When Ruby isn't hanging with her friend, Theresa Petticoat, she's finding out what kind of mischief her brothers are getting into. She's sweet and sassy and every bit as tough as her older siblings. She sings like nobody's business; she has a pet iguana named Lady Love; her favorite color is grape-jelly purple; and when she grows up, she's going to be the most famous woman animal doctor on the planet. She's the fabulous, oh-so-spectacular Ruby Marigold Booker!

In Book 1, Ruby is leaving her old school and headed to a new one where nobody knows her--and where her older brothers rule. But that's about to change, because Ruby Booker has BIG plans! Although things don't go according to plan, Ruby manages to grab the spotlight when she sings a song over the P.A. system during announcements. By the time school lets out, one thing is clear: Ruby Booker isn't "the Booker Boys' baby sis" anymore.

The Ruby and the Booker Boys series is kind of like the Cosby Show meets the family from Spike Lee's "Crooklyn" meets Punky Brewster. I want readers to not only fall in love with the magnifcent, talented, sassy character that Ruby Marigold Booker is but also to see that the series is about community, family and self love most of all.

What is your favorite scene from your book?

In every book of the series, I make sure I have at least two scenes where the family is together. In particular, a scene at the dinner table. I think its so important for families to sit down, converse, and share a few minutes out of the day together. I thought it would be cool to see Ruby, her parents and her brothers' individual personalities and ideals bounce off of each other.

Why did you elect to write for children?

The cool oppurtunity that you have as a children's book author to forever etch that love and passion for books is so powerful. I take it as a honor and a gift from God to impart possitive ideas, stories and characters on children.

I learned how characters can suddenly create stories, attitudes, twist and turns on their own without the authors intervention. Our jobs are to create the initial scenarios and allow them to grow and do what they are intended to do for the particular story.

We have to have our minds and immediate environments set just right before we can create. Its not like a regular nine-to-five. Our minds work differently.

What is the best lesson you have learned from another Children book writer?

Push and promote your own work and never wait on someone else to do it. I think that the Ruby and the Booker Boys series fills a huge void in children's lit; there are essentially no book series published by major publishers that star and feature a Black girl and her family. But I should not expect the publisher or any other entity to be as passionate as I am to spread the word and make this series a huge success. It won't get done if i don't ask God to help me.

Landing national exposure. As an author you are responsble for promoting your books to the fullest. But if you are limited by resources and your lack of celebrity ties, you have to get creative with it, and be persistent.

I am addicted to caffeine, in particular Diet Mountain Dew. I can't stop drinking the stuff!

1)This is not like signing a multi million dollar singing or sports contract.

2) Don't edit while you're writing-let the story roll.

3) I should have learned how to illustrate my own stuff.

I do a lot of online promotion; posting on blogs, discussion boards,etc. I also reach out to non african american schools and bookstores. Add a little flavor to their collections.

Can you give us five Children book authors you admire?

1)Langston Hughes-he really inspired me to create characters and to develop dialogue amongst characters that was distinct. 2) James Baldwin- The way he captured human thought processes, ideals, and emotion with a keen sense of perception was amazing to me. His prose and essays was always penned like poetry. 3)Zadie Smith-her story telling ability is very full and entertaining...plus she's gorgeous.

Can you give us one do and one don’t for those aspiring to be a children’s book writer?

Please, read a lot of books in the genre or style that you are pursuing. Look for a literary agent that represents authors like you. Don't limit yourself to one type of story, setting, or group of characters.

The next book in the Ruby and the Booker Boys series, book four, is entitled Ruby Flips For Attention. In it, Ruby attempts to put together a drill team for all of the wrong reasons. I also have a middle grade novel set to release next year with Scholastic. 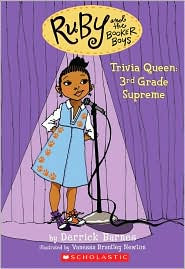 Eight-year-old Ruby Booker is the baby sis of Marcellus (11), Roosevelt (10), and Tyner (9), the most popular boys on Chill Brook Ave. When Ruby isn't hanging with her friend, Theresa Petticoat, she's finding out what kind of mischief her brothers are getting into. She's sweet and sassy and every bit as tough as her older siblings. She sings like nobody's business; she has a pet iguana named Lady Love; her favorite color is grape-jelly purple; and she has BIG plans. She's going to be the most famous woman animal doctor on the planet. She's the fabulous, oh-so-spectacular Ruby Marigold Booker!

In Book 2, a zoologist is coming to visit Ruby's school, and there will be one representative from grade levels 2-8 chosen to compete in an animal trivia contest. The winner will land season passes to the Chill Brook Zoo for everyone in their grade level. Ruby, who can absorb factual information quickly and recall it at any time, is the third grade delegate, and her brothers are on board to help--or hinder--her preparation. 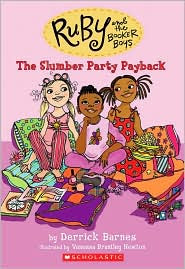 The last time Ruby hosted a slumber party, her big brother Roosevelt pranked and frightened the girls all night. Now it’s payback time! With a little ingenuity and a lot of lipstick, Ruby and her crew come up with some hilarious high jinks that are sure to teach Roosevelt a valuable lesson. Bottom line—don’t mess with Ruby Booker!
Posted by LaShaunda at Monday, December 22, 2008

This book sounds so cute! I can hear Ruby's sass right in your blurb. :-)