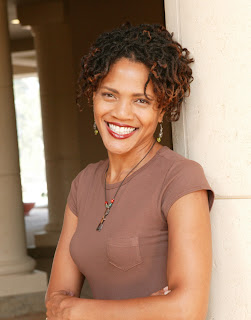 TRISHA R. THOMAS is the author of Nappily Faithful, Nappily Married, Roadrunner, Would I Lie To You and the top selling Nappily Ever After, which was a finalist for the NAACP Image Award for Outstanding Literary Work. Her debut novel was optioned by Halle Berry and Universal Pictures for adaptation to film. Trisha lives in Riverside , California . 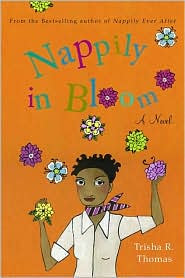 Airic and his famous televangelist wife Trevelle Doval, make the evening news when Airic is accused of battery and his life is suddenly turned upside down. But when Venus and Jake try to suspend Airic’s visitation rights, they discover that Airic isn’t willing to go down without a fight.

Meanwhile, Jake’s best friend, Legend, turns up on his doorstep with trouble not far behind. The past is back with a vengeance and it includes blackmail, murder and enemies who are looking for some payback. But everything takes a dangerous new turn when Venus goes missing. For Jake it’s now a race against time to save the woman he loves.

Nappily in Bloom is the fifth book in the Nappily Series. Venus has grown as a character and I have grown as a writer. I hope readers enjoy the new growth.

The emotional response from Nappily Faithful was too important not to revisit these characters. There was such an out pour of reactions that I had no choice but to bring Trevelle and Delma back. Venus is the central point but she's basically trying to keep everyone else level headed, including Jake.

Having a series makes it difficult to just tell a regular story. You have to reintroduce characters so their fresh and exciting as if you've never met them before. Delma is the judge from Nappily Faithful but in this one, she's vulnerable. Knowing that the man her daughter is about to marry is bad news, but unable to prove it to protect her is the worst fear a mother can have. I had to live through each character's voice and some of it was truly frightening. What would you do if your daughter or son was going to marry someone who you knew was rotten to the core?

The ending. I wasn't sure while I was writing Nappily In Bloom who would be the one locked in the storage box. So it was exciting even for me as the writing who would end up there, and how. It worked out perfectly because all the feedback is great. I love a great ending to a book that makes you satisfied.

It takes me a year to write a book, plotting, hashing out emotions and characters. It only takes a few days to read. That's what the hard work is about, making it fun and easy to read. Sometimes, people interpret easy reads as not worth the time or money, but it's the opposite. A good fast read comes from the author putting in a lot of time making it make sense.

Did you ever think your book would be turned into a movie?

I always wanted to make movies when I was a kid. I wrote out stories using pictures and voices on tape. I think it was one of those divine promises made by the universe then forgotten about. Thirty years later it's all coming to fruition.

"Stay with it. Don't give up. Stay positive." These are words from Kimberla Lawson Roby. Over the last ten years we've kind of been each other's ear and shoulder to lean on. It certainly helps to have someone know what you're going through. Writing is very isolating. You need a lot of optimism to keep yourself motivated. You're sitting in a room alone, just you and your blank screen, it helps to play those positive messages from a friend.

Go out and talk, do signings and wow them with my great personality. If that doesn't work, I beg. Please, please, buy my book.

I'd have dinner with Zora Neal Hurston.Her writing and novels were so ahead of her time. She wasn't appreciated then, but now she's celebrated and honored. I just think it's ashamed how we don't appreciate or give recognition to some artists until they've passed away. Also at the table would be Terry McMillan and Jennifer Weiner. Two authors who write about their own cultures so distinctly. I'd want to interview them, ask if they ever wanted to move beyond black characters or Jewish characters and if they think the publishing industry limits who and what we can write about based on who we are as authors.

Our theme for this month is The Business Of Writing.

What are three things you wished you’d known earlier that might have saved you some time/frustration in this business?

Everything I've learned was necessary. Nothing would have saved me time. I'm on my sixth book released by St. Martins, and it still feels like my first. You have to write, then get out there and sell, end of story. There's no resting on your laurels.

YES! I'm excited about Un-Nappily In Love. Venus still owns her In Bloom floral shop. I had a ball writing this one because there were no murders, kidnappings, or extortion. Well, there is a girlfriend running down her married lover, but it's still light and happy in the end.

Thanks so much for stopping by SORMAG. It is always refreshing to interview an author who enjoys writing. I think sometimes some authors get caught up in the work part of writing they forget why they started writing in the first place.

Many blessings to you and I look forward to seeing your book on the big screen.

I enjoyed the interview. You always ask such great insightful questions. Thank you again!!
Trish

Hey Trisha, great interview and congrats on the success of your "Nappy" series. I too look forward to seeing your book on the big screen. Much continued success!

I just read this and can't believe I missed the first four installments. I loved this book, and found it interesting that I had conflicted feelings when one of the characters got his just rewards at the end of the story. (No spoilers here.) He could have gone either way in the story so it was interesting to see this unfold.