At the young age of ten, Kirby Roy III was introduced to poetry, but his exposure to literature just didn’t begin or end there. “There were always books around my house, so whenever I would get bored, I would
read.”

In 1989, he left Hampton University before completing his degree in order to become a writer. However, it was not until graduating from Clark Atlanta University that he was able to actively pursue his passion.

While maintaining his full time position as a financial analyst, Kirby eventually managed to finish his first book. “After I had Love Letters edited, I started taking notes on the second book. I wasn’t sure how I was going to get the first one published, but I knew that I didn’t want to stop writing.”

As it turned out, his patience paid off. Kirby’s first work was published and received rave reviews. Heart and Soul Magazine said that, “Kirby Roy III adds another voice to the growing club of male novelist making a mark…” Since then he has continued writing, including penning three screen plays. He also served as story editor, producer, and line producer for the award winning film Big Ain’t Bad.

I basically started writing as a reaction to losing motivation while pursing my college degree. I was not doing well in school, and the thought came to me, ‘what’s the one thing that you would do for free.’ The answer came back, ‘writing’. So after improving in college, earning a degree, and later finding a job, I decided to pursue writing.

I think the thing I learned from writing this book is what I’ve learned from writing all my books. That is, do something you love and pursue it with passion. If you do those things, then no matter what happens, you’ll always be a success. And that doesn’t necessarily mean financial success, or success from recognition. It can just means success in that you will always be able to look upon the time you spent doing what you loved and smile.

I really didn’t have anything in particular that I wanted to accomplish with this book. I just wanted to tell a good story. However, with that said, I do want my stories to mean something, (if to no one else but myself.) So I would say that in writing the story I incorporated things that were interesting and important to me.

I guessed what surprised me most about becoming published was just the fact that getting published is just as hard if not harder than actually writing the book itself. At least that’s been my experience.  Also, that when you do get published, you have to take responsibility for publicizing the book yourself. Whatever he publisher does to market the work, you can always add more.

The thing I love the best about writing is the peace I feel when I have finished a night of writing. There is a certain calmness and serenity I get when I’ve done a nights work. The thing I hate the most is the loneliness that comes from writing.

Do pursue your craft with passion. Make it your life. With that said, don’t quit your day job. There is a practical side of writing which means you need to support yourself while you’re writing. And also that you may never make a million dollars from writing. So you will need an income beyond your writing.

That books don’t write themselves. Writing is actually a labor intensive endeavor and it takes time and sacrifice.

Since I have a full time job, which means I have to write at night, then I really don’t have much if any spare time. However, in the free moments that I do have, I like to spend time with family and friends.

I really don’t interact with my readers on a constant basis. However when I do interact with them, it’s been from book signings and e-mails.

Our theme for this month is Writing the book, what advice do you have for staying motivated to complete the book?

The biggest thing to completing the book is to stay focused and don’t let anything get in your way. I  personally have to block out everything, (except my job of course). There are certain tools that each individual will use to stay focused. For me it was routine. On my way home from work I would listen to music that made me think about my characters and the story. When I got home I would immediately take a nap. When I woke up, I would clean while listening to music. That helped me concentrate on what I wanted to write that night. Then I would simply start writing. I would write for a while, take a break, listen to more music and gather additional thoughts, then get back to writing. The trick is to think about the book as much as possible. Make it your life. Think about it just about every second of the day and you will give up just about anything in the world to see it completed.

Do you do anything to promote Black History Month?

I really don’t do anything to promote Black History Month.  Although, I do try to learn about black history and issues concerning African Americans throughout the year.

A quote from one of my favorite movies is, ‘I never saved anything for the swim back.’ So with that said, I know that if you try working at something you love, you may achieve your dreams. But if you never try, you will definitely never achieve your dreams.

I have three novels that can come out after this one. The first is a story about a couple whose impending marriage is potentially interrupted by tragedy. The second is simply a story about two people falling in love, but ultimately having to decide if distance will separate them. The third is the tale of a couple having to survive the aftermath of hurricane Katrina.

You can find out more about me at my web site: http://www.kroy3rd.com/. Or you can contact me at Kirby@kroy3rd.com 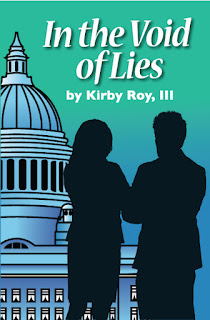 In The Void Of Lies, is a riveting tale of infidelity and redemption intermingled against the passage of the health care bill. The action begins with Justin Powell applying for a job with Senator Fitzgerald in order to spend more time with his wife, Tyra. For her part, Tyra is trying to uphold her half of their marriage by covering up a secret.

Meanwhile, Senator Fitzgerald is begging Senator Danforth for money because he is being blackmailed. So as Senator Fitzgerald tries to pass his health care bill, the excitement progresses with his wife, Katie, confronting the infidelity she already knew about. And in a dramatic conclusion almost torn from the latest news headlines, Senator Fitzgerald stands at the Senate podium addressing the nation as Justin and Tyra try to decide on the outcome of their marriage. And with that, the tale ends with the truth redeeming all that they were hiding.

Do you need help with your promoting? - http://sormag.com/advertise.htm
Posted by LaShaunda at Monday, February 06, 2012

I just read the synopsis for In the Void of Lies...sounds exciting!! I look forward to reading it!