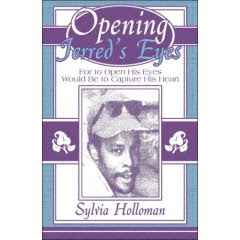 Opening Jerred's Eyes: For to Open His Eyes Would Be to Capture His Heart

The next morning Evette got up and fixed them something to eat, she was going to head home to get her things and bring them back. She really needed to work on her latest book. Her editor was expecting it soon. Evette had left Jerred in the bed sleeping. She was on her way to wake him up. As Evette entered the living room, there he was, looking so fine! He had thrown on a pair of jeans and a shirt, the shirt wasn't buttoned up, and neither were his jeans. Jerred pulled her into his chest and held her tightly.

Jerred kissed Evette with such power she melted into his chest, and hung on for dear life. When the kiss ended it took Evette a moment to catch her breath.

"Jerred honey, I have to get going."

"No, I don't want you to leave, stay." Jerred ran his hands down her backside and gave her a big squeeze.

"Don't start that! You started that last night, that's why I'm still here! Now let me get my shoes on I need to leave."

"This is where you belong, baby, with me."

Evette got a very serious look about her. She had wanted to ask Jerred a question for a while now, especially after the weekend they had spent together. Evette had watched Jerred as he held Mya and Quintin's baby. She wanted to ask him then but didn't. She hadn't felt the timing was right. But maybe this was the right time.

"Jerred? Where is this relationship going, I mean, are you interested in more than what we have? Or are we just wasting each others time."

Jerred was just about to kiss her again, when her words stopped him. "Oh no baby, don't start that. Why can't we just enjoy being with each other. I like the way things are, don't you?"

"As a matter of fact, no, I don't. You see, I have given you something I swore I would only give to the man I marry. So if I've made a mistake then I need to know now before I continue to waste anymore of your time."

"Dammit Evette. Why do we have to do this right now? What do you what from me? I said I love you, isn't that enough?"

"Jerred this it's fair to me, I love you too, but I want a future with you. I want to carry your child inside of me."

"You know I can't promise you a child. Evette what happens if our baby has sickle cell? You have no idea what that was like for me or for Mya. Baby I left my wife and my son because I couldn't handle it. Why can't we get married and just be happy with each other?"

"Because I want to have your child. You can't run from reality for the rest of your life Jerred. I can't promise you our child won't have anemia, but I can promise you that you will be a great father to our child. If only you would let go of your fears. Open your eyes honey, people live with worse everyday. If we love each other enough we can get through anything."

Jerred sounded as if he were exhausted. "Baby, we have Evan, isn't that enough?"

Evette pushed away from Jerred, she was loosing the battle of fighting back her tears. She turned and grabbed her purse and headed for the front door. Jerred was fast on her heels.

His voice was loud and demanding. "Evette, don't you walk out that door!"

She stopped for a second as she dug in her purse, she produced a silver key ring that held a single key. She turned towards Jerred.

"Here, I won't be needing this anymore." Evette placed the key in his large hand and ran out the door.

He stood there, he couldn't think straight. Tears were rushing down his face. He felt lost, as if his world would no longer turn if she were not a part of it.

Evette finally got her car door open and slide in the driver seat. That was as far as she could go. Her heart was pounding so fast and her body shook uncontrollably. She placed her head on the steering wheel and just cried.

There was a small knock on the window, but she ignored it. Then her door opened and she felt her lovers hands grab for her. Jerred pulled her legs out and placed her shoes on her feet.
Jerred's voice was drenched with emotions. "Baby, you forgot your shoes." He then laid his head in her lap and held onto her as tight as he could.

"Evette baby, don't leave like this, come back inside so we can talk. Baby here take your key back. Come inside."

"What about next weekend, we are suppose to go see Evan and my mother? You are still going aren't you?"

"Okay, I can understand you feeling like that now, but maybe in a day or so you will feel different. Baby, Evan will be so hurt if you don't make it."

"Give Evan my love. Explain it to your mother anyway you want, but I can't do this anymore. I love you Jerred, now please move."

Jerred made sure she still held onto the key before he kissed her on the forehead and backed up so she could close the car door and drive off. He didn't remember going back inside his house, he only remembered waking up hours later, alone and with a broken heart.
Posted by LaShaunda at Friday, October 26, 2007