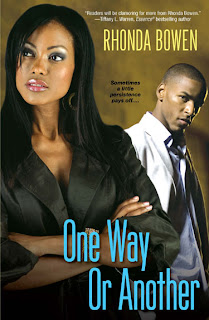 One Way or Another
Atlanta reporter Toni Shields will do whatever it takes to get a good story. So when she’s arrested for sneaking around the mayor’s house, she’s prepared. What she’s not prepared for is getting demoted—or her run-in with stubborn Adam Bayne, director of the local young men’s rehab center.

The first time Adam saw Toni, she was wrangling with the cops. Now she’s looking for a scoop at Jacob House. Adam has no intention of letting her near his boys—yet as usual, her pushiness wins. And when she genuinely helps a teen in trouble, Adam sees a side of her that cares about more than just a headline. Soon, they become close—their attraction growing. But there’s more to both their lives than meets the eye. Toni has a haunting family secret, one that is taking a great toll on her. And when she uncovers that Adam has a devastating past of his own, not only their relationship, but their futures, and their faith, lie in the balance. 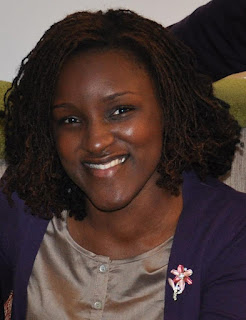 Rhonda Bowen knew she would be a writer as early as eighth grade when she wrote her first novel with a classmate in a dollar notebook. While waiting for the day to come, she spent a lively childhood growing up in Kingston, Jamaica and later attaining her Bachelor of Arts at the University of the West Indies. Not long after, her family moved to Toronto, Canada where she spent a few years working in public relations and event planning. Throughout this time however, her desire to write stayed alive. She eventually completed her first novel, Man Enough for Me, which was released under Kensington Books’ Dafina imprint in February 2011.

In October 2010, urged by the call of God, Rhonda packed up her life again and moved to Thailand to teach English. Though most of her time was spent entertaining her students in the name of education, she still found time to scribble away at new stories. She returned to Toronto, where she now resides, just in time for the February 2012 release of her second novel One Way or Another. She is excited about the future and the path that God has for her life.

In Grade 8 in a notebook with my friend Simone. We were both voracious readers and we used to write stories together, taking turns writing a chapter until we got bored with the story and decided to start a new one. After we got separated by college and life, I stopped writing for a while, but then got back into it as a means of dealing with difficult situations in my life. Writing became like therapy to me. When I was introduced to Christian fiction, I realized there was an audience for the stories I wanted to write, and that’s when I started Man Enough For Me, my first published novel. Since then it has moved from being a hobby to a career, and the rollercoaster hasn’t stopped.

That an extra pair of eyes does wonders. I always cringe when someone reads my work for the first time. But having that outside perspective really helped me make One Way or Another so much better than it initially was.

I hoped that my readers would come to see that their past does not have to determine their future. Some of us make mistakes or are the victims of other people’s mistakes, but we don’t have to let them define who we are. With Christ, we all can have amazing futures.

The characters came first, specifically Adam, because he was inspired by a young man I met a couple years ago. This young man had such an amazing story that it immediately inspired the story for me. The whole plot kind of formed around that.

How much non-writing work is involved! It’s not just about doing the thing you love. There is so much work to do promoting your book and yourself. That part of it can take up as much time as the writing part.

I hate the part of the project where I am not sure about the story; where I don’t know if the story I am writing is the one I want to write; where I don’t know whether to trash it and start over or keep going. Conversely I love the part of writing where the story takes over. I know I am there when I find myself scribbling scenes from the story on restaurant napkins, or on the back of receipts so I don’t forget them by the time I get home.

One: That there is so much pressure when you are writing a second book. And it’s not even pressure from the readers or my editor. It’s my own expectations for myself, and my own desire to make sure that every book I write is better than the one before.

Two: That people who don’t write won’t necessarily understand when you say you can’t go out on Saturday night because you have to write.

Three: That I should keep everything I write. There are so many half stories I wrote over the years that I can’t find now. I wish I still had them because they can sometimes inspire my current project.

You’ve probably heard this a million times but it still rings true. Do write as often as you can. The more you write, the easier it becomes to write. Don’t write with the sole purpose of being published. Write because you enjoy telling stories, and because you enjoy the craft of writing.

That at the start of a project or even mid way it is hard to know exactly what the book is about. I know for me personally that the focus changes all the time. So when you ask me now, what is your next book about, I can’t really tell you, because even though I am currently writing it, it’s still too early to be certain.

I am a pescaterian, which basically means I am a vegetarian who eats fish. It’s my stepping stone to being a full vegetarian, which I hope to accomplish within the next year or so.

What spare time? (ha ha) I go to school and work right now so there’s not much of that. But I love to read and when it’s not cold outside I play sports. Oh! And I love trying out new recipes.

I am online all the time. I ‘meet’ most of my readers over facebook or via email and I always try and stay in touch because I am always floored that a reader would take the time to contact me.

Our theme for this issue is Resources On The Net. What resources on the net have been helpful in your writing?

I wrote One Way or Another while I was in Thailand, and as you can imagine there weren’t many English resources available to me, so pretty much all my resources came from the net. I have kindle for PC and used the ebook versions of a lot of great books like The Plot Thickens by Noah Lukeman and Self-Editing for Fiction Writers by Dave King and Renni Browne. Those two are my writing encyclopaedias. I also followed the news online. That provides a lot of inspiration and factual information for me.

Pamela Yaye. I met her at a writer’s workshop she did at the Malvern Public Library in Toronto. She is great romance writer and an amazing person. She was so down to earth and gave us great ideas on how to plan your characters. I still have the dictionary I won at her workshop!

That Jesus is my help.

I’ll try! I am working on another project that is due out sometime next year. For now let’s just say it’s about a young woman, her man, her siblings, and a plan for revenge that goes too far.

I am a facebook junkie, so you can always connect with me there at facebook.com/MsRhondie. You can also email me at rhonda.bowen@yahoo.com or visit my website rhondabowen.com.

Do you need help with your promoting? - http://sormag.com/advertise.htm
Posted by LaShaunda at Friday, March 09, 2012

Thanks for featuring me on SORMAG! I really appreciate the support.