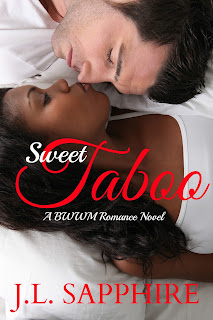 Finding out the man she planned to marry is already married, losing her job, getting kicked out of her apartment unless she sleeps with her perverted landlord…Naomi thought her luck couldn’t possibly get any worse…until she’s forced to move back in with her widowed father and finds out he’s remarried Donna, a younger white woman. As if that isn’t a hard enough pill to swallow, Donna’s very handsome nephew, Matthew comes to live with them for a few weeks while his place is being renovated.

No matter how much Naomi wants to dislike Matt, the romantic tension between them is undeniable. When the kissin’ step-cousins decide to take things to the next level, Naomi will quickly learn that while love may be blind, color isn’t. She’ll be forced to choose between finding happiness with Matt, and a society that still isn’t accepting of interracial relationships after racism rears it’s ugly head. 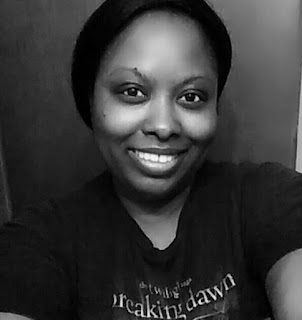 J.L. Sapphire is the pen name and alter-ego of Joyce L. Blalock-Thomas. She was born and raised in southern Arkansas, and she still lives there with her two children.

She is the self-published author of several books, short stories, and novellas including My Secret Life: Confessions of a Housewife, Two Can Play That Game, Masquerade: Nina's Revenge, and Sweet Taboo (a BWWM romance) In 2016, she joined the Brown Girls Publishing family when her short story, The Ex Factor, was chosen to be included in an anthology titled The Ex Chronicles.

Writing is Joyce's version of Calgon. By locking herself in her room, she can get away from everything & everybody (at least for a little while) and lose herself in the lives of the characters she creates.

What inspired your book?

I like to read and try my hand at writing different genres. With all the racism and injustices that happens to Black people daily- such as unlawful arrests and/or killings while unarmed- I wondered what it must be like for couples who are of a different race to discuss issues such as these at home if/when they have different opinions about the situations and how hard it must be to be an interracial couple in a society that's still very racist, even in 2016.

To learn to agree to disagree when it comes to race. It's certainly understandable for us to be mad and protest and speak out when another Black life is taken, but to realize that not everyone who's white is out to get us. There are good and bad people in all races.

Naomi. Going into detail about her dating history, which led her to getting down with the swirl. Since I've also had a quite interesting dating history myself, it was easy to relate to her at times.
What did you learn while writing this book?

Again, to not judge people by the color of their skin. Naomi was ready to find a way to get rid of her father's new wife, simply because she was white. As time went on, she realized they actually had a lot in common and she wasn't the bad person she'd thought she was.

(1) To always stand up for myself, because there are people out there who will walk all over you if you let them. (2) To not take bad reviews to heart- everything isn't for everybody, but just because a reader gives your book a one star review, it doesn't mean you're doomed as an author. (3) The last thing is something I've always done, but to continue following my own heart, mind, and gut instinct, and not go with the flow just because everybody else is doing it.

What advice would you offer to someone whose first book is about to be released?

To write what you feel, what's in your heart, and don't worry about how it will be received. Again, some people will love your work, some won't, but don't take negativity personal. Also, being an author- especially a new or self-published author-  can be a difficult process. People don't know you at first, so you have to build a following for yourself, which can be discouraging sometimes. Be patient and don't get sucked into bad publishing deals or attach yourself to a certain publisher because you think they can get you to where you want to be faster. Also, DO YOUR OWN RESEARCH and learn as much as you can on your own. Google is your friend. Don't rely on other people to tell you everything

I used to be so shy and soft-spoken. I've always been very sensitive, and the smallest thing could make me cry. I worried a lot about what people thought of me. All of that has changed. I no longer care about other people's opinions of me. Shy is no longer a word people associate with me. When I began writing romance novels, I was a little hesitant to write certain things, because it's not expected of me. I thought, "Will people think I'm a freak if I write this erotic love scene?" Once my mama read my books and she was cool, I got over it. Now, I get told often, "Oh my word...girl, who knew you had that in you!" and statements similar to that. LOL. Most importantly, because I like to write female characters who are independent and confident, it's made me feel better about me. I demand respect, I no longer tolerate people thinking they can treat me any kind of way and I'm supposed to just deal with it. Those days are long gone.

What’s are your three favorite social media platforms and how are you using them for promotion?

I am a social media junkie. My favorites are Facebook, Instagram, and Twitter. I promote my books on all three platforms. I post giveaways, reviews, and informative articles about writing and publishing, which can help other authors or aspiring authors. These sites are also great for connecting with readers and potential readers.

That regardless of whether or not I ever become famous for my books, I am super proud of myself for taking the step to make my dream of becoming an author come true. It's not always easy, but I wouldn't change a thing. Sometimes, I wish I hadn't waited until I was almost 40 to start my literary journey, but everything happens when it's meant to.

Anything you'd like to say to the readers of SORMAG?

Thanks for reading my interview and check out my author page on http://www.amazon.com/J.L.-Sapphire/e/B00KM0B5AC

There's something there for everybody to enjoy.