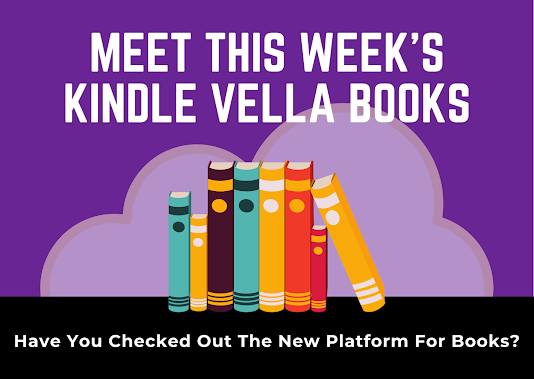 Kindle Vella is a new platform for serialized books.  Each week SORMAG's blog will feature new books for you to check out.  Our hope is for you to find new books and authors to follow.  Please come back and let us know what you think about the books.

There were two things that Delilah despised her ex, Christopher, and the elf of the shelf he got their daughter. There were two things she loved her daughter, Daisey, and her ex's brother, Shane. Find out what shenanigans the elf plays and if she takes an open invitation for a family holiday.

Things We Should Forget (Completed)

When Ainsley is forced to move across the country and transfer from her private school life to a public school, she never guessed there would be a boy who would test her kindness. Ryker is a rebel without a cause and Ainsley is a girl with several causes. Ainsley can't stand Ryker and his smug, carefree attitude, so why is it that he's the only one she feels like she can talk to?

Alecto, Furie of The Dawn, immortal goddess of punishment, has a problem. When her father-figure is murdered, and an innocent human is accused of the crime Alecto must betray the Olympians to do what is right. In the process she not only discovers a new and frightening power within herself but despite herself becomes close to the infuriating human as they try to clear his name. Plagued by visions of a stranger Alecto must confront that which harrows all gods... Humanity or immortality?

A Season of Strife: The Wiles of Esther

If the days of the Devil are numbered, what's a demon to do? As the War for Souls hurtles towards a shocking end, Esther must brave a strange new world. Surviving it won't be easy, but then again, when the fuck has it ever been?

Rowan Sinclair was just trying to get through life. Until a couple of thugs saw fit to kidnap her after work one night, babbling on about blood marks and vampires. She figured they were crazy, but that was before she saw the mark, met the enigmatic Leonidas Solari, and was reminded of an ancient heritage she'd tried to forget.

Lily was born with a shadow, and everyone knows shadows are very bad luck. Join in the misadventures of Lily and her shadow with episodes only on Kindle Vella.

In this modern fantasy world, Conor Brantley is an entrepreneur down on his luck. his in-laws despise him, and his wife is on her last straw with him. However, on his 25th birthday, he receives a small inheritance that will change the course of his life. A year's wage for a lower-class family may not be much in scale, however, the dragon pendant his mother left him is far more valuable. May the blessing of the dragon god Celia be upon you as we follow Conor on his pheonix rebirth.

4 Bullets and a Ghost - Season One

"Jack you're dead." "Doesn't mean we can't talk." "I thought it did." Private Detective Finley Wade works alone. Or she did, until she started talking to ghosts. Now her mentor has decided to rejoin the firm. Three days after his death. Their first case together? Solving his murder.

Taya struck out into the forbidden forest to save her people. Versal, a time blind fire lord, is drawn almost at once despite her being cursed. He can't violate the treaty & mustn't fall in love with a human. Can he resist the strange woman or will he bring about war and banishment? If sharing a bed, dangerous quests, cuddling for warmth, ancient rites, stolen kisses, mystical balls, & lingering touches are elements you enjoy, then let the forest lure you in & see what it holds...

Becoming A Social Butterfly is all about introducing you and your books to new readers. Inside this book is a step-by-step plan to building your readership. It includes actions steps you can start implementing when you close the book. Are you ready to become a Social Butterfly?

Check out SORMAG Boutique for your gifts for readers and writers.
https://sormag-boutique.myshopify.com